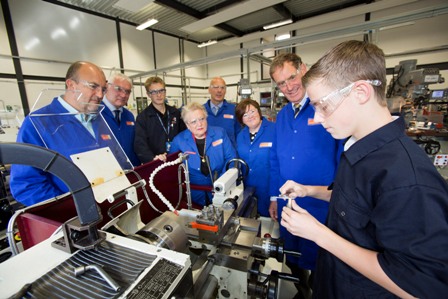 As we already know, the Hinkley Point C nuclear power station in Somerset will be jointly financed by the French energy group, EDF and the China General Nuclear Power Corporation (CGN) with a commissioning date of 2025 and costing £24.5 billion.

The prospect of 25,000 jobs being created has been welcomed by companies that will be involved and trades unions such as Unite which gave the project a cautious thumbs up.

“We welcome the news as securing long-term employment for our skilled members in the region and also contributing to future energy security,” explained Kevin Coyne, National Officer for Energy, Unite. “Although Hinkley Point has successfully raised the finance, this has taken a long time, so we need to ask as a country, whether this investment model is the best and most cost effective way of financing much needed investment in future UK infrastructure projects.”

EDF itself now finds itself in charge of what will be the biggest construction project in Europe with many critics that will be ready to pounce at any faltering delivery. Its CEO, Vincent de Rivaz, was bullish: “Hinkley Point C will be at the forefront of the revitalisation of the UK’s industrial skills base and we have worked hard to build a robust supply chain to support new nuclear in the UK.” He believes the project would boost 'industrial stamina in the UK' and kick-start the new nuclear programme. Mr de Rivaz went so far as to state that experience gained at Hinkley Point would help make successful nuclear projects around the world.

EDF has already published a list of preferred bidders on its website and made clear its commitment to the local area. In order to prepare the potential workforce, EDF Energy has invested £11 million in training, education and skills in Somerset with the opening of both a new Energy Skills Centre and a Construction Skills Centre in partnership with Bridgwater College. It believes that the project will provide a ‘wealth of apprenticeships and opportunities for the future workforce and in doing so will leave a long-term and sustainable legacy for the region’.

EDF Energy insists it has also worked closely with unions on its new nuclear programme in the UK. Agreements have already been reached with the Unite, GMB, UCATT and Prospect unions for the Hinkley Point project, covering safety, quality, productivity, pay, industrial relations, as well as the development of skills and training.

As expected, the view of those that support renewables has been far from happy with Hinkley Point C.

The Solar Trade Association (STA) expressed dismay at the attitude of the government to favouring what it felt was a hugely expensive venture. It has already come out with an analysis that purports to demonstrate that a combination of solar, storage and other flexibility mechanisms would cost consumers approximately 50% less than Hinkley Point C over the 35-year lifetime of the its subsidy.

“We are not saying that solar is the solution to all our energy problems, nor that it could completely replace other technologies,” admitted Mike Landy, Head of Policy STA. “However the government needs to explain why it is drastically cutting support for solar energy while offering double the subsidy to Hinkley Point C. It also needs to explain why it is championing overseas state-backed utilities over British solar companies which given stable support would have considerable growth prospects.”

Not unexpectedly, Greenpeace UK was scathing about the UK government’s decision. “With this deal [Chancellor] George Osborne is not so much backing the wrong horse as betting billions of consumers’ money on a nag running backwards,” declared Dr Doug Parr, Chief Scientist Greenpeace UK. “There’s no end in sight for the nuclear industry’s dependence on billion-pound handouts while the renewable sector is on the verge of going subsidy free. Backing the former and punishing the latter makes no economic sense whatsoever. Our grandchildren will one day wonder why their bills are propping up a foreign owned, outdated and costly nuclear industry instead of supporting cutting edge UK firms producing cheap clean energy.”

Meanwhile, as reported in ThisWeekinFM last week, EDF appears to be having trouble with its French Flamanville reactor build - which is now six years overdue and a similar project in Finland. Both are identikits to Hinkley C.

EDF has formally asked the French government for permission to delay the start of its EPR nuclear reactor in Flamanville until 2020. The French utility had been set a 2017 deadline to get the reactor up and running.

Hinkley itself was originally scheduled to produce electricity in 2017 - now the target is 2026.

The China General Nuclear Power Corporation has bought a one-third shard of Hinkley C for £6 billion - valuing the plant at £18 billion despite the cost already being set at just under £25 billion! China, though vowing not to saturate the project with Chinese workers, will be supplying the technology (the technology Britain used to excel in exporting) - which could be one unexplained answer to the differing values.

Construction of the Flamanville reactor began in 2007 and has been plagued by delays and budget overruns - it was originally priced at just Euro 3.3 billion and start commercial operations in 2012.

Greenpeace's Dr Doug Parr said: "News of further delays at Flamanville is yet another red light flashing on the Hinkley control panel our government is determined to ignore. Wherever the French giant has tried to build this type of the reactor, there have been endless delays, ballooning costs, and major technical setbacks. Instead of forcing UK consumers to pay billions for outdated, subsidy-guzzling nuclear power, the government should invest in the clean energy source that are cheaper than nuclear and on the verge of going subsidy free."

Picture:   Bridgwater College's Energy Skills Centre where some of the of investment is already being used to help Somerset prepare for Hinkley Point C nuclear power station.

France's Flamanville Fans Hinkley Fears as Franco-Chinese Accord is Reached

The future for the proposed Hinkley Point C nuclear power station has become clearer - national media including the BBC have confirmed a Franco-Chinese go-ahead to build...