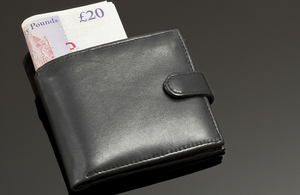 Workers across the UK saw their take home pay increase when the Personal Allowance and Higher Rate Threshold are increased from April 6.

This will cut income tax for 31 million people, and take 1.3 million of the lowest paid out of income tax altogether, compared to 2015-16.

An increase to the personal allowance, to £11,500 in April will see a basic rate tax payer take home an extra £100 each year.

The point at which those in England, Wales and Northern Ireland pay the higher rate of income tax will increase to £45,000.

The Lifetime ISA will be available from 6 April

The Lifetime ISA will allow adults between the ages of 18 and 39 to open an account and put away up to £4,000 each year and receive a bonus of up to £1,000 a year on their contributions until they turn 50. The family home allowance will be added to the existing £325,000 Inheritance Tax threshold, meaning the total tax-free allowance will be up to £500,000 for an individual and up to £1 million for a surviving spouse or civil partner, by 2020-21.

Fuel duty will remain frozen for a seventh year.

Picture: Money in me pocket - tax breaks for the lower paid.