Ticket to Ride Without a Care 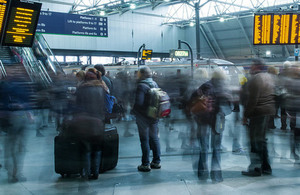 The government has this week (ending October 13) set out details of its £80 million programme to introduce smart ticketing across England and Wales by the end of 2018.

Transport Secretary Chris Grayling, back from the Conservative Party Conference, said: "Passengers across the country want smart ticketing and this government will deliver it.

"This significant investment will ensure that passengers across the network can use mobile phones, bar codes and smart cards across almost all of the network by the end of next year."

The £80 million investment will ensure:

The Department for Transport is also working on plans with the Rail Delivery Group to bring forward the next generation of ticketing systems to give passengers more tailored options to pay for their travel, saving them money and offering better value deals.

The investment will quickly deliver benefits to passengers across the country. Discussions with train companies about the introduction of mobile phone smart cards are at an advanced stage, with deals soon to be reached with 3 operators. This will mean that both mobile phone smart cards and mobile barcode tickets will soon be accepted by every operator in England and Wales and be interoperable across different franchises.

In addition, pay-as-you-go travel is being rolled-out extensively across the rail network, including with the introduction of KeyGo – a contactless travel card – by Govia Thameslink Railway. The KeyGo system allows passengers to use their card to tap in and tap out across virtually the entire Thameslink, Southern and Great Northern networks, from Cambridge to Brighton, and automatically be charged the most appropriate fare for their journey. Other train operators are soon to follow, with tests happening shortly on South Western Railway, c2c and Greater Anglia.

Picture: The government plans to introduce smart ticketing across England and Wales by the end of 2018