Time to Call Time on Asbestos 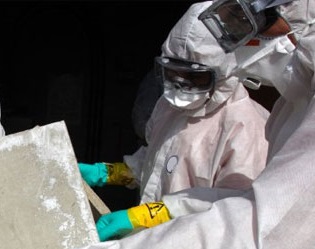 A report by the All-Party Parliamentary Group calls for ‘urgent action’ to address the legacy of asbestos that remains in the UK’s workplaces and public buildings.

Approximately 5,000 people die prematurely every year as a result of asbestos exposure, or three times the number of road accident deaths.

Almost all of the people who are dying now were exposed to asbestos decades ago and it, according to the parliamentary group, now often wrongly seen as being a problem of the past as its importation and use has been banned since 1999.

However, asbestos containing materials can be found in around 500,000 non-domestic premises (and probably around 1 million domestic ones). ‘It is often people who are working in maintenance, refurbishment or demolition but people can, and do, become exposed simply by working in a building with asbestos as fibres can become dislodged and breathed in’, states the report.

The parliamentarians believe simple regulations for managing asbestos in the workplace, however good, will never protect workers from risk. ‘So long as asbestos is found in any place where someone could be exposed there will be a danger.’

The All-Party Parliamentary Group on Occupational Safety and Health believes that the time has come to put in place regulations requiring the safe, phased and planned removal of all the asbestos that still remains in place across the UK.

“There is far too much complacency about the asbestos which we can still find in hundreds of thousands of workplaces as well as a majority of schools where children face exposure to this killer dust,” stated Ian Lavery, Chair of the All-Party Group. “We believe that the government needs to start now on developing a programme to ensure that asbestos is safely removed from every workplace and public place so that we can end, once and for all this dreadful legacy which has killed so many people, and will continue to kill until asbestos is eradicated.”

Picture: The All-Party Parliamentary Group on Occupational Safety and Health has called for the complete removal of asbestos in the UK