Toads in a Hole 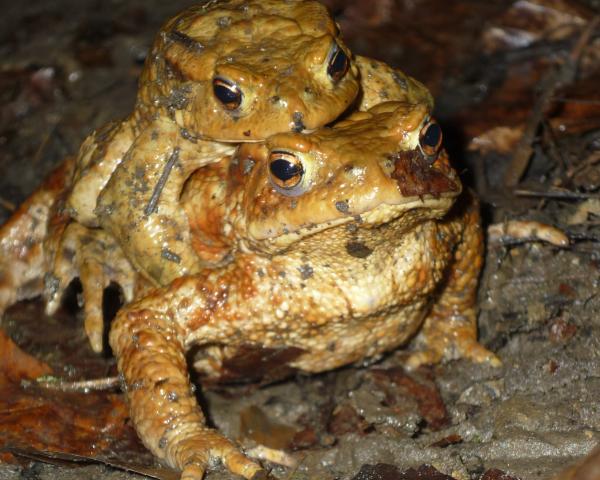 The common toad (Bufo bufo) has been continuously declining in the UK and Switzerland since the 1980s, according to a study published October 5 in the open-access journal PLOS ONE by Silviu Petrovan from Froglife, UK and Benedikt Schmidt from KARCH, Switzerland.

Rare and endangered species are often the focus of conservation efforts but common species that are in decline may also have a significant impact on ecosystems. Despite the ongoing global decline in amphibians, monitoring data on the abundance of widespread and common amphibians remains scarce.

Froglife’s 'Toads on Roads' project is a toad patrol conservation effort where volunteers in the UK help approximately 800,000 amphibians per year migrate safely across busy roads to their breeding ponds. The authors of the present study used citizen science data from “Toads on Roads” and other sources in the UK and Switzerland to assess long term national and regional trends for one of Europe’s most abundant amphibian species, the common toad.

Despite extensive volunteer conservation efforts, researchers found that the common toad population has declined continuously and rapidly in both countries every decade since the 1980s, and are close to qualifying for IUCN red-listing. While the cause of the declines is unclear, likely factors include increased urbanization causing habitat loss, and increased traffic causing more deaths on roads. For example, South-East England, the most densely populated region in the UK, is also the area with the greatest declines in toad populations.

“Citizen conservation action shows that one of Europe’s most widespread and abundant amphibians, the common toad, has been declining for decades and this decline has been largely overlooked,” says Benedikt Schmidt.

Like many other ceremonies, conferences and networking events this year, the Planet Mark Awards are being hosted online to deal with the logistical effects of...