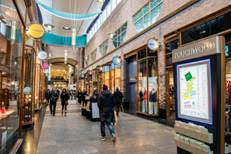 SPIE UK’s Facilities Services business has been awarded a contract by Workman Facilities Management to provide mechanical and electrical maintenance at the Touchwood Shopping Centre in Solihull.

The contract, which encompasses M&E works, to provide repairs and maintenance across the entire shopping centre and its grounds, is valued at more than £2.5m.

SPIE was awarded the contract following Workman’s interest in changing its approach from a Total or Integrated FM contract, to a more traditional split between hard and soft services. So SPIE’s facilities service team will now work alongside Workman’s chosen soft service provider, having successfully transitioned the service provision to the new model.

Touchwood comprises more than 80 shops, as well as 20 bars and restaurants.

Grahame Hart, SPIE’s Business Development Director, Facilities Services, comments: “Workman wanted to take a new approach and move away from its existing total facilities management contract. We were able to assist them in their objectives and won the tender explicitly because we understood and demonstrated the importance of having a transition phase to support the contract migration.”

Andrew Cole, General Manager, Touchwood from Workman Facilities Management says: “We are grateful to SPIE for making the complicated, simple. Touchwood provides an important service for the city and our priority is ensuring that retail customers continue to get the best of their shopping experience; maintenance, that doesn’t impact negatively on their time in the centre, is vital. We trust that SPIE is the partner to help us with this goal.”

Picture: The management of the Touchwood Shopping Centre in Solihull believe they have got their FM mix right - touch wood