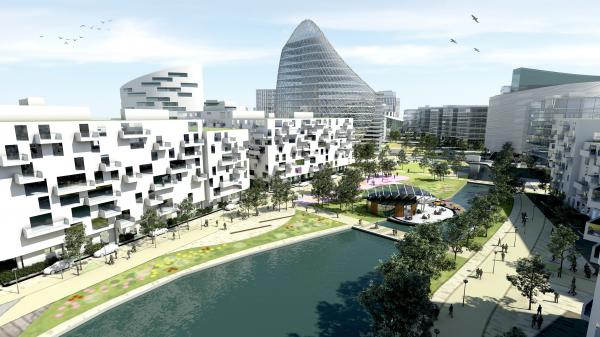 Plans to bring a new community to Greater Manchester have been given the green light by Trafford Council. The development is expected to create 5,000 jobs and bring 3,000 new homes, local amenities, over 100,000 sq ft of commercial space and a new primary school to Trafford.

Over the next 20 years, the £1 billion investment by Peel Land and Property will create Trafford Waters - a new neighbourhood, which will be situated on 50 acres of land along the banks of the Manchester Ship Canal within Traffordcity, home of intu Trafford Centre and other major regional attractions.

This sustainable development will significantly contribute to the local housing needs of a growing population and will include family homes, as well as a new primary school and health and community facilities, to support its new residents.

Reflecting the model of other successful mixed-use waterfront developments by Peel, such as MediaCityUK, there will be 16 acres of high quality, open landscaped space which is the equivalent of 11 football pitches. This will include four multi-use games areas and children’s play parks for the community to enjoy. This area will be activated by ground floor, small-scale shops as well as food and drink outlets.

James Whittaker, Peel Land and Property’s Group Development Director, said: “Trafford Waters will bring a unique neighbourhood to Greater Manchester, which will not only provide much-needed residential housing but also office space which will help unlock business and employment opportunities.

“The development will be sustainable and feature cycleways, plenty of landscaped, green spaces and waterways, making it a really attractive place to live, work and play. It will be a high quality development that will feature everything families would expect an established urban community to have and we’re very excited to be bringing this to the people of Trafford.”

Cllr Sean Anstee, Leader of Trafford Council added: “Trafford Waters has all of the characteristics to be a model for urban regeneration and the creation of a high quality place that people choose to live and work. This sustainable development will bring significant investment into Trafford alongside a further boost for our local economy, already the most resilient in the North West.

“That the application has been granted on the very day final approval has been received to commence construction of the Metrolink Trafford Park line, simply goes to show that where we have a plan for major development, the necessary improvements to public transport and roads alongside new schools and green spaces can be a reality.”

Peel has directly committed to spending £30 million towards the new extended A57 road into Traffordcity at junction 10 of the M60, which includes a new lifting bridge link crossing the Manchester Ship Canal adjacent to Barton Bridge. This new link bridge and road is due to be completed next year, which will further enhance its accessibility.