Transport for London is on the Move 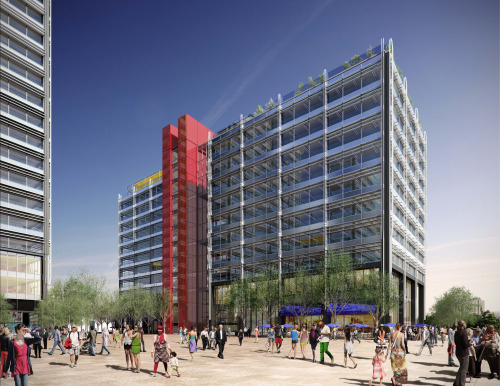 In a major relocation of its headquarters, TfL is heading to the International Quarter being built in Stratford, East London.

Transport for London has signed a pre-let to occupy a building as part of the second stage of the £2.1 billion development at Stratford.

TfL has pre-let the entirety of the office space within the 265,000sqft building with construction starting this summer. Detailed planning consent has been secured for the building, offering a glimpse of London’s newest commercial district.

An estimated 3,000 TfL workers will relocate to the International Quarter’s new generation of offices and once completed, a predicted 25,000 people will work at and visit the site each day.

“We are consolidating our office accommodation into a smaller number of larger buildings,” explained Steve Allen, MD, Finance, TfL. “The International Quarter in Stratford provides the ideal opportunity for us to make further progress with its excellent transport links while enabling us to achieve significant savings.”

The designs have been led by Rogers Stirk Harbour + Partners and Vogt Landscape Architects that have been appointed to the major office scheme to work alongside the existing panel of architects.

Located at the gateway to the Queen Elizabeth Olympic Park, work is already well underway on the first phase of, a 333-unit residential development named Glasshouse Gardens, overlooking the Aquatics Centre, the former Olympic Stadium and ArcelorMittal Orbit.

The International Quarter is seen as a ‘central pillar’ in the regeneration of Stratford, providing the new commercial element and jobs to the area’s role as an important sporting, retail, cultural and academic destination. Stratford’s recently announced Olympicopolis will be home to internationally renowned institutions, including the Victoria and Albert Museum, Sadler’s Wells, the Smithsonian Institution, University College London (UCL) and the University of the Arts London (UAL).

Picture: An estimated 3,000 TfL workers will relocate to the International Quarter’s new generation of offices.