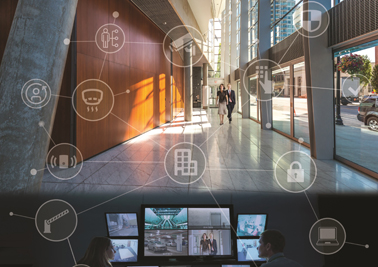 Today buildings can have a multitude of critical systems and sub-systems all requiring different methods of usability and control. As such, Tyco has developed the Victor Integration Solution to provide one single point of command and control that improves ease of use for ‘seamless’ and efficient day-to-day operations.

It connects discrete systems through integration modules and a single user interface. This means that systems such as fire, security, video, access control, intercom, lift management, BMS and analytics can all be brought into one powerful point of control, eliminating the need for users to be trained on a multitude of sub-systems.

The operational advantages include site mapping to aid emergency dispatch. With the ability to adapt and grow with a site’s requirements, victor Integration Solution is promoted as being future-proof as well as flexible, offering capability with legacy as well as bespoke systems. The Connected Program from Tyco Security Products also enables third party integrations making transition easier. The system provides low cost of ownership and helps to reduce hardware, software and maintenance. It offers the ability to visualise extensive meta-data, i.e. pulling vital information from multiple systems, providing analysis and actionable insights to improve safety and security as well as effective site management. The so

Picture: The victor Integration Solution is being seen as a comprehensive software program for managing a wide range of building systems