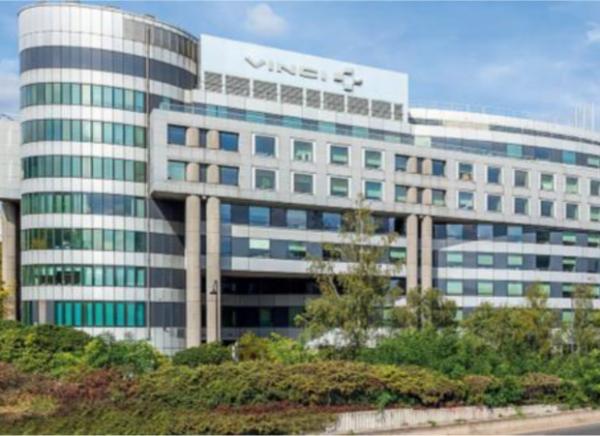 Foncière des Régions has purchased the head office of the Vinci Group in the heart of one of the most dynamic business districts of Greater Paris, Rueil-sur-Seine in Rueil-Malmaison.

The offices complex is located next to the Rueil-Malmaison station of the RER (the Paris regional rapid transit system) and is visible from the A86 motorway. It currently comprises 36,000 sq.m of floor space split between three independent buildings, ideally located in the heart of Rueil-sur-Seine and 978 car parks.

With 750,000 sq.m of office space occupied by over 180 companies, Rueil-sur-Seine is one of the most dynamic and attractive business poles in Greater Paris for large corporate groups to locate their premises.

With this investment (of around Euro 129 million, rights included), Foncière Euro 10 million per year, representing an immediate yield of 7.8%). The group will take advantage of this period to define the redevelopment of the site to be implemented after the departure of the Vinci Group.

This move also strengthens the group's territorial coverage of the major services areas in Paris such as Saint-Denis (delivery of Green Corner in 2015), Levallois-Perret (acquisition of Oméga B at the end of 2015, development of the Thaïs complex under way), Issy-les-Moulineaux (redevelopment and extension of the Edo complex in progress) and Paris-Gare-de-Lyon (ongoing redevelopment of the Traversière complex). The attraction of these areas is characterised by their excellent rental income and very good road and public transport connections (Paris underground/RER).

Picture: Vinci is to leave it's iconic Paris HQ