Waterloo - Couldn't Escape If I Wanted To 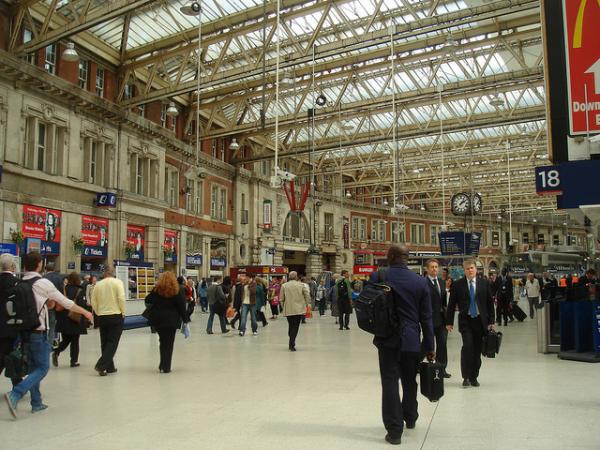 My, my, passengers at Waterloo on Tuesday and passengers from Kent for the rest of the week - at least - will be meeting their destiny in quite a similar way.

And now it seems their only chance is giving up the fight and simply not bothering to make it in to work in the hottest lead-up to the end of the school holidays in years.

Perhaps taking an unscheduled extra break or throwing a sickie - or even being allowed to work from home might allow some over-stressed commuters to feel like they win when they lose.

OK - an end to the ABBA references - enough to say Waterloo station - the country's busiest - which has seen commuters suffer throughout August as ten of its platforms were closed while work was carried out to extended them to take longer trains, reopened fully today in a scene taken straight from a Napoleonic battle. The platform work finished on time - but testing of a new signalling network highlight failures, meaning trains couldn't efficiently get in or out. South Western Railway (the organisation responsible for Waterloo and stations along SouthWest routes) was claiming everything would be OK by 2:00pm but with the caveat that trains would be in the wrong locations and thus journeys were likely to be disrupted well in to the evening.

Passengers who had signed up to email alerts were informed services running across the whole SouthWest network may be cancelled, delayed or revised.

Responding to the disruption Anthony Smith, Transport Focus (an independent group that monitors rail performance) chief executive, said: “Passengers will be disappointed that, after all the promises, communications and planning the Waterloo upgrade slipped. Passengers booked tickets and made travel plans based on the promises made by the industry.

“Clearly the priority is to get things moving again, it is crucial that information is clear and plenty of staff are on hand to help. Then this must be reviewed to make sure the lessons of today are learnt and built into future events.

“In the meantime every single passenger affected should claim compensation. Send a clear message to the industry and make sure your voice is heard.”

Since the engineering works started on 5 August at Waterloo station, Transport Focus has been monitoring the impact of delays and disruption on passengers. The latest updates can be found by Clicking Here. https://www.transportfocus.org.uk/home/focus-waterloo-station-upgrade/

A South Western Railway spokesperson told ThisWeekinFM this morning: "An issue arose this morning with complex signalling equipment being tested and the project team required more time to finish. The work has been completed and the site has been handed back into use. We are now running trains into all platforms at London Waterloo and we are re-introducing all train services using a phased approached. We are expecting to be running a normal service by 14:00 today.

"Until a normal service has resumed queueing systems will remain in place at various stations across our network. Queenstown Road, Earlsfield and Norbiton have now re-opened but are very busy."

Passengers can use their tickets to travel via the following alternative routes:

CrossCountry services between Reading and Bournemouth.

Thameslink services between Elephant and Castle and Wimbledon.

Kent passengers in for a trying time

Southeastern passengers diverted to and from London Blackfriars today (Tuesday August 29) have been met with the news that affected trains – 40 in total each day – will run to and from Waterloo as planned from Wednesday 30 and for the remainder of the working week.