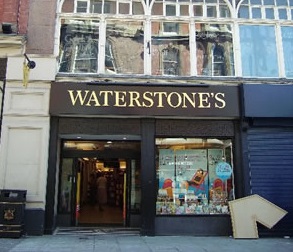 A fatal injury occurred earlier this week when a staff member at the Blackpool branch of Waterstones in Blackpool was crushed when a sign, loosened by high winds, fell on her.

The death of Margaret Sheridan, 68, occurred on Monday evening at approximately 17.30pm when a sign at the front of the shop in Bank Hey Street fell and trapped her.

Despite the efforts of passers by and emergency services, Ms Sheridan was confirmed dead at the scene.

A joint inquiry has been launched by Lancashire Constabulary and Blackpool Council and it is thought that it is inevitable investigators will see if the extreme weather conditions could have weakened the shop sign.

Waterstones has issued a statement on the tragic incident: ‘Waterstones confirms that a tragic accident at its Blackpool shop has resulted in the death of one of its booksellers. Margaret Sheridan was a much loved and well respected colleague. We offer our deepest condolences to her family. The accident is being investigated by the authorities.’

1. Following the tragic accident, has Waterstones instigated a risk assessment for its other stores?

2. Given the prior warning of gale force weather, does Waterstones have a system in place to check on safety, especially exterior shop signs?

The spokesperson declined to answer these questions and replied: ‘We are at the moment unable to give any further comment or confirm further detail, as there is an investigation underway.’

A witness, who preferred not to be named, told the BBC that Bank Hey Street was "known for being a bit of a wind-trap….It's a very, very windy street. It's not the first sign to fall down."

Talking to TWIFM, a spokesman for Blackpool Council stated that although there had been an interim meeting between its officials and the Lancashire Police, it was 'too early to speculate' on the cause of the accident and on whether the particular nature of the street had led to the death.

Pictured: A Waterstones’ sign killed a staff member on Monday. Are signs, like this one in Nottingham, also at risk in the current stormy weather?