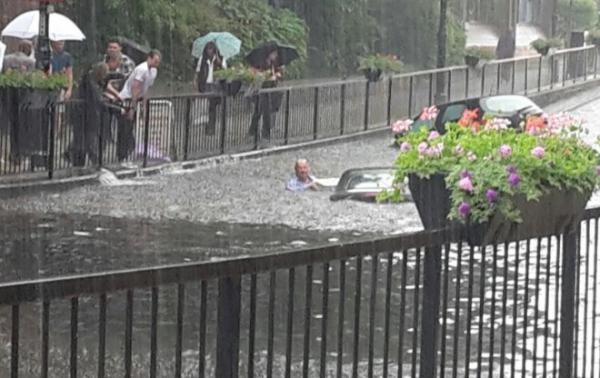 Ten fire engines and 72 firefighters and officers attended a fire at an Earls Court hotel on Trebovir Road on June 5. Around 150 people were evacuated from the hotel and from hotels either side.

The fire broke out in a terraced four storey hotel and block of flats with a mansard roof. The whole of the second floor was damaged by fire, three quarters of the third floor and all of the roof.

Fire crews wearing breathing apparatus rescued 12 people from the building. Five people were evacuated from a neighbouring property including two from the roof via an aerial ladder.

London Ambulance Service was at the scene, fortunately there were no reported injuries.

Station Manager Winston Douglas who was at there, said: “This was a serious fire and crews and worked very hard to stop the fire spreading.”

The London Fire Brigade has been called to a large number of flash flooding and lightning strike calls across London, with a large number of the calls coming from south east London, particularly around the Croydon area, which was badly affected by storms on June 7.

The most significant incident was three cars flooded to the depth of two metres on Manor Road in Wallington. Two people were assisted from their cars before the arrival of the Brigade, and a third person was rescued by firefighters.

The Brigade received up to 200 flood-related 999 calls and has attended a number of incidents thought to be caused by lightning, including trees, hoarding and telegraph poles alight.

The Brigade has a range of equipment which can be used to help rescue people trapped by flood water, pump water away and protect properties. Some of the Brigade's fire rescue units are equipped with water rescue equipment such as inflatable rescue boats. The Brigade also has a number of  high volume pumps stationed at strategic locations across the capital. These can be used to pump large amounts of water away from flooded areas.