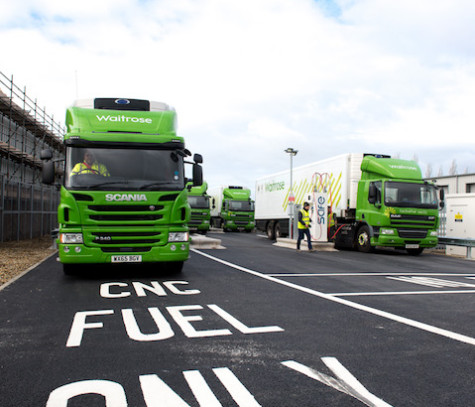 The unveiling saw the first major customer, Waitrose, part of the John Lewis Partnership, fill up at the new facility as a fleet of branded HGVs rolled on to the forecourt. The retailer has a regional distribution centre less than 1 mile from the new CNG filling station and will be its anchor customer.

“John Lewis Partnership is committed to running a sustainable logistics operation and the use of low carbon fuels in our vehicle fleet is a key element of that,” explained Justin Laney, Central Transport General Manager, John Lewis Partnership. “Our strategy is to displace diesel with bio-methane where practical and we run one of the largest alternatively fuelled heavy truck fleets in the UK to enable us to do that. This filling station is an important step that will help us continue to improve our fleet sustainability.”

First of a kind

CNG Fuels, in partnership with National Grid, state that this filling station is the first of its kind in the UK that is capable of refuelling more than 500 HGVs per day. Located near to J28 on the M6, the it will be accessible around the clock, 365 days a year.

The facility also supplies 100% renewable bio-methane (Bio-CNG) and is being promoted as an important part of the UK’s growing CNG refuelling infrastructure. The bio-methane is made from waste at anaerobic digestion plants and delivered to the filling station through the National Grid pipeline system.

“Even though the price of diesel and petrol has recently plummeted, the wholesale price of natural gas has also dropped and our customers can still enjoy a pump price of CNG at our Leyland station that is more than 30% cheaper than the equivalent price of one litre of diesel,” stated Philip Field, Director, CNG Fuels. “Using natural gas also cuts CO2 emissions by more than 20% and if fleets choose to fuel their trucks with Bio-CNG, they will be running on 100% renewable gas.”

Picture: Waitrose is the biggest customer for the new filling station in Leyland, Lancashire that is operated by CNG Fuels

Seven men have been arrested by HM Revenue and Customs (HMRC) and four tonnes of toxic waste removed, after two fuel laundering plants were discovered in Essex on...