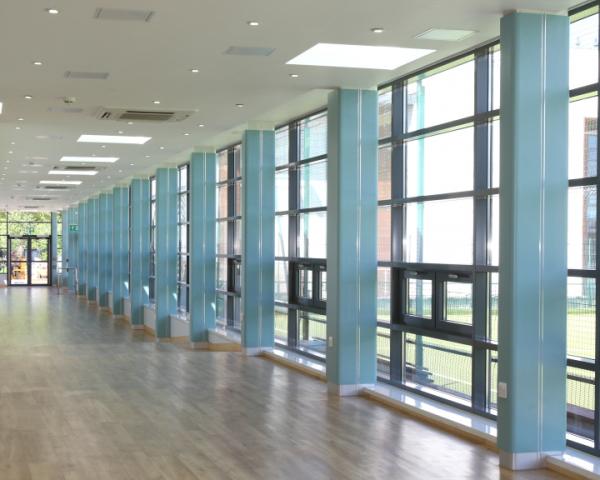 An extension to the Dame Kelly Holmes Sports Centre at Farnborough Sixth Form College to provide additional facilities for students has had column casings installed.

The column casings use Quadra pre-formed plywood column casings which were supplied and installed by Encasement to conceal structural steelwork and improve interior aesthetics.

Originally opened in 2007 in honour of the British double Olympic gold medallist, this latest expansion of the college’s sports and P.E. facilities is designed to link the centre with a separate sports hall while also providing much needed additional recreation and social space for students.

The new annexe also incorporates a large foyer area and uses extensive glazed curtain walling that extends for more than 50m from the new entrance along the full length of the building and is supported by 16 structural columns which are concealed by the rectangular Quadra casings.

Manufactured from 8mm thick pre-formed plywood, 15 of the casings measure 368mm x 200mm, while the final one is 368mm x 350mm to accommodate a double structural support. Each one is finished in Formica Dusty Jade matt green laminate. The casings also incorporate matching infill strips to give an integrated finish to the vertical joints and feature 100mm high brushed aluminium collars at ceiling and floor level.

While most of the Quadra casings stand 3m high, during installation Encasement needed to trim and tailor some casings to allow for two changes in the level of the floor which increases along the building’s length of the extension by approximately 300mm.