Why Jupiter is Now a Star 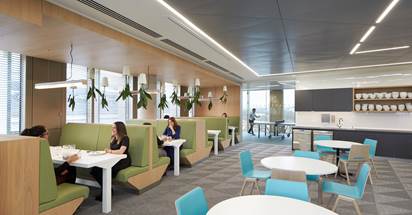 A vibrant new workspace for Jupiter Asset Management that marries a new contemporary aesthetic to a traditionally conservative industry sector has been created by HLW.

The successful UK fund management group moved from what was described as a ‘tired office space’ in London’s Hyde Park Corner and became the first tenants of the Zigzag building, a new BREEAM Excellent rated building in the heart of Victoria.

Its new home has been designed to reflect an evolution of their brand and status using the 56,000sqft space to increase collaboration and interaction among its 430 staff.

Appointed to deliver full scope interior design services HLW International’s design scheme draws heavily on the building’s architectural features and surroundings referencing, in particular, the building’s juxtaposition with Victoria Street and St James’s Park. The design also takes advantage of the Zigzag’s angular facade, making good use of the abundant natural light and drawing visitors to the outside views.

Jupiter’s brief was to create fresh and original environment that encouraged teams to collaborate through the introduction of multiple, formal and informal breakout spaces. ‘Quiet zones’ have also been incorporated to complement the open plan working environment and facilitate concentration and private conversations.

Staff wellbeing was a key objective, from the introduction of sit stand desking for all staff, through to a large social space that can be re-configured for internal and external events as well as staff dining. The project has achieved SKA Gold with approved suitable materials being used throughout in an effective manner.

“We articulated the ‘urban vs nature’ theme in the choice of materials, contrasting timber with concrete, through the use of brightly coloured fabric wall panels and upholstery along with planting and exposing some of the concrete ceiling to make reference to the area’s urban qualities,” explained Jason Turner, Principal, HLW London.

The efforts by HLW appear to have been well received by Jupiter staff and management. ”Our staff have thoroughly embraced the more contemporary, collaborative working environment and our clients have been impressed by the welcoming, professional quality of the top floor meeting suite,” said Edward Bonham Carter, Vice Chairman, Jupiter Asset Management. “The project has been a resounding success.”

Picture: A fresh and original environment that encourages teams to collaborate has been created at Jupiter Asset Management’s new home in the Zigzag building in Victoria by HLW