Why Smoking is Choking Lives 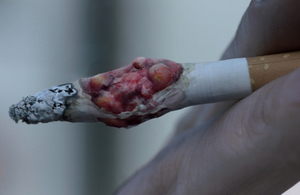 PHE has highlighted the blight of smoking-related lung disease for 1 million people in England and causes 25,000 deaths each year – twice the European average.

Public Health England (PHE) has pointed out the debilitating nature of this condition that leaves many finding difficulties in climbing stairs, housework or gardening with many even unable take a holiday because of their disease.

Chronic obstructive pulmonary disease (COPD) is the umbrella term for serious lung conditions that include chronic bronchitis and emphysema and for which there is no known cure.

People with COPD have difficulties breathing, primarily due to the narrowing of their airways and destruction of lung tissue. Typical symptoms include breathlessness when active, a persistent cough and frequent chest infections.

However, PHE is keen to point out that those affected can still take steps to slow the progress of the COPD.

To highlight the impact of this progressive disabling disease, it has released a short film featuring Olympian Iwan Thomas, whose mother has recently been diagnosed with COPD. Together with four smokers, he took part in an experiment to illustrate the difficulties of living with advanced COPD and urged people to quit this New Year. “I’ve never fully understood COPD or the everyday consequences but when the simple things like climbing the stairs, making a cup of tea or walking to the bus stop become impossible, it’s serious,” he stated.

Clinical lead for COPD at Royal Brompton Hospital, Reader in respiratory medicine at Imperial College London and medical adviser to the British Lung Foundation, Dr Nicholas Hopkinson, was emphatic in his prognosis. “My advice to anyone who smokes is don’t ignore a ‘smoker’s cough’ or getting out of breath. Take it as a sign to quit before any damage to your lungs gets worse. If diagnosed early, changes in lifestyle, treatments such as pulmonary rehabilitation, and prescription medications can slow down the progression of the disease and help patients cope with symptoms like breathlessness and fatigue.”

Picture:    COPD kills at least 25,000 every year in England but steps can be taken to limit its damage