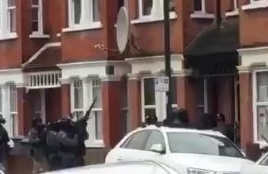 What is being described as an active terror plot has been foiled after police intervention saw one woman shot at a London address and six people arrested.

At the time of writing, the shot woman had not been formally arrested because of her condition in hospital.

The Metropolitan police have said this was an ongoing counter terrorism investigation that culminated on Thursday, 27 at about 7:00pm. It took place a residential property on Harlesden Road between the north-west London area between Harlesden and Willesden (near to Wembley).

The woman who was shot, aged in her twenties, was taken to hospital by London Ambulance Service. She remains in hospital in a serious but stable condition, under police guard.

All have been arrested on suspicion of the commission, preparation and instigation of terrorist acts under section 41 of the terrorism act 2000. They are currently in custody at a south London Police station.

The address and persons connected with it had been under observation by counter terrorism officers as part of an ongoing intelligence led operation. This incident is not connected to the arrest in Whitehall earlier on Thursday.

Searches at the address are ongoing, as well as further searches at linked addresses across London.

"Given the horrors in London of a few short weeks ago, I wanted to reassure the public that our increased activity to combat terrorism over the last two years continues - both by police and security services. Activity continues around the clock to identify and stop these threats and we are making arrests on a near daily basis.

"So – to yesterday’s events.

"In Whitehall, a 27-year-old man was arrested by armed officers from the Met's Specialist Firearms Command, who stopped and searched him as part of an ongoing counter terrorism investigation.

"He remains in our custody having been arrested for Terrorism Act Offences and possession of offensive weapons and there are two ongoing searches at addresses in London as part of that investigation."

"In our second and unrelated investigation," continued Deputy Assistant Commissioner Neil Basu. "Last night at just before 7:00pm, our highly trained firearms officers carried out a specialist entry into an address on Harlesden Road (between Harlesden and Willesden)  that we had under observation as part of a current Counter Terrorism investigation.

"An armed entry was necessary due to the nature of the intelligence that we were dealing with and involved armed officers firing CS into the address.

("As is routine we have informed the Independent Police Complaints Commission.)

"In total six people have now been arrested in connection with that investigation - five at or near the address and one in Kent.

"The two further arrests were made when a man and a woman - both aged 28 - returned to the address later last night.

"Searches are ongoing at three London addresses - including Harlesden Road - as part of this investigation. Due to these arrests that we have made, I believe that we have contained the threats that they posed.

"With the attack in Westminster on 22 March so fresh in people’s minds, I would like to reassure everyone that across the country officers are working round the clock to identify those people who intend to commit acts of terror.

"After that attack, we increased the number of officers on duty patrolling at key locations - and that continues as we police against the backdrop of a severe terrorist threat."

Deputy Assistant Commissioner Basu went on: "There are constant acts of immense bravery by officers - armed and unarmed - those that the public see when our officers run towards danger, just like yesterday but a huge amount of unseen work that the public will never know about from us and our brilliant security services.

"I would also like to thank the public for their continued help and support. No matter how hard we try it is communities that will defeat terrorism and we rely on your vigilance. Please continue to let us know of any suspicions or concerns you may have. No call is ever a waste of our time and every call is treated seriously and confidentially and investigated."

Picture: The moment police broke into a house in north-west London to foil a plot and arrest six people in total. A seventh, a woman in her twenties, was shot and will be arrested when she has recovered sufficiently. With thanks to Kieran McKenna - Twitter

Knives Out at Westminster - Bombs in Oxford Street

On Thursday 27, just before 2:30pm, police tackled and hauled a man to the ground near to Westminster and the Houses of Parliament. He was arrested for carrying a bag of...