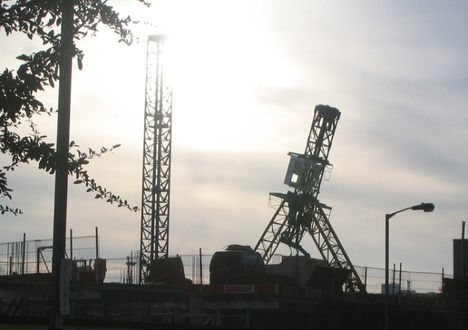 A case against a crane hire company and its director over the deaths of an employee and member of the public when a tower crane collapsed at a construction site in Battersea over 8 years ago has been moved to Southwark Crown Court with a hearing scheduled for 9.30am 11th March 2015.

At a hearing this week, the judge expressed concern that it has taken nearly 9 years for charges to be brought for the deaths that occurred when a crane collapsed. This follows a first appearance at Westminster Magistrates Court at 2pm on Wednesday 25th February where Falcon Crane Hire Ltd and Douglas Genge were charged with Health &Safety at Work Act (HSWA) breaches after HSE identified alleged failings with maintenance and overloading of the crane in question.

Jonathon Cloke, 37, fell to his death from inside the cab of the crane when it overloaded and snapped at a Barratt Homes site in September 2006. A section of the crane then struck and killed Michael Alexa, 23, as he cleaned his car in a neighbouring street outside the development.

The GMB union has condemned delays in bringing to trial next week a director and company over the deaths of a crane driver and member of the public.

Jonathon Cloke, 37, fell to his death from inside the cab of the crane when it overloaded and snapped at a Barratt Homes site in Battersea, London in September 2006.

A section of the crane then struck and killed Michael Alexa, 23, as he cleaned his car in a neighbouring street outside the development.

However, it took three and a half years for an inquest to hear the evidence and the coroner concluded that Falcon Crane Hire Ltd and its MD, Douglas Genge had failed in maintenance procedures. The GMB union has criticised the overall delay of that and going to Westminster Magistrates Court next Wednesday as unacceptable.

"It has taken nearly nine years for charges to be brought against the company and the director for these deaths due to a crane collapse,” stated John McClean, GMB National Health and Safety Officer. “Faulty crane maintenance caused these deaths.”

The Notification of Conventional Tower Crane Regulations 2010, introduced after the Battersea deaths, led to regulations which set out the duty to notify the use of conventional tower cranes on construction sites to the Health and Safety Executive.

These have since been revoked as ‘red tape’, argued the GMB, believing that ‘employer pressure’ had led to the regulations being revoked and the associated Register closed down from April 2013.

When the HSE was approached by TWIFM to ask why there had been such a delay, a spokeswoman replied: “HSE took the lead in this investigation after the inquests concluded in 2012. Before that the police had primacy – which is standard in all cases of fatalities – with HSE working alongside.”

Picture: Complaints have been made in bringing to trial next week a director and company over the deaths of a crane driver and member of the public nine years ago.

The former Olympic Stadium at Queen Elizabeth Olympic Park saw tragedy at the weekend as a man fell to his death. The HSE has now stated this is not a workplace incident....