A Picture to Die For 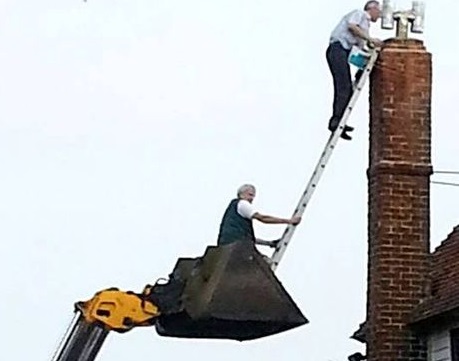 The Ladder Association’s competition on the worst examples of ladder use has come up with a classic. The image we are showing is not strictly to do with the FM sector but the ‘winner’ shows how not to use ladders and in this case, one hopes our viewers can recognise that there are fools in every area of the building industry.

The success of Idiots on Ladders mirrored a record-breaking year for the Ladder Exchange, which traded over 15% more ladders than in the previous year, continuing its three straight years of growth since being taken over by the Ladder Association in 2012.

The winning Idiots on Ladders picture received nearly 60% more votes than its two joint runners-up. It showed two men inside the bucket of an excavator which was already around 20 feet off the ground, with one of them footing the ladder in the bucket so the other could climb to the top.

Do not try this yourself!

The Ladder Association is already planning for the 2015 Ladder Exchange, which will take place in autumn. All of the tips and guidance produced for the 2014 Exchange are still available on its website (www.ladderexchange.org.uk). The full Idiots on Ladders picture galleries from the past three years can be found on the Ladder Association Facebook page (facebook.com/ladderassociation).

Pictured: There’s one born every minute – proved with these winners of the Ladder Association’s Idiots on Ladders’ competition 2014.