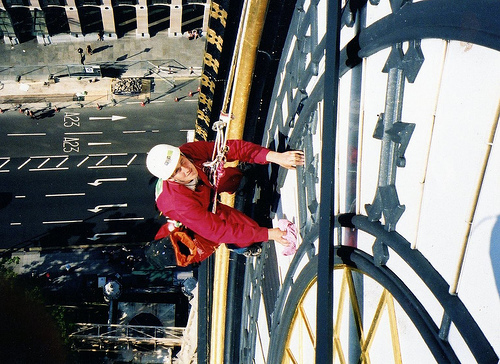 Bong...cleaners to do a shift on Big Ben. Bong...they will also do a thorough inspection. Bong...any maintenance work will be done on the hoof or scheduled for later in the year.

An abseiling team will climb out of the windows of each of the four clock faces with a view to tackling one-a-day this week - with an a fifth day thrown into the contract to cater for bad weather.

What does Wiki say

Big Ben is the nickname for the Great Bell of the clock at the north end of the Palace of Westminster in London which is invariably extended to refer to the clock and the clock tower. The tower is officially known as the Elizabeth Tower (prior to being renamed in 2012 it was known as simply Clock Tower) to celebrate the Diamond Jubilee of Elizabeth II. The tower holds the largest four-faced chiming clock in the world and is the third-tallest free-standing clock tower. The tower was completed in 1858. The tower has become one of the most prominent symbols of the United Kingdom and is often in the establishing shot of films set in London.