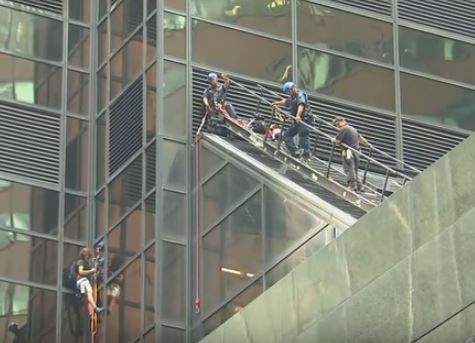 The 20 year old who climbed to the twenty-first floor of the Trump Tower and campaign headquarters of the man who would be king/president - Mr Donald Trump - is said to be a supporter who just fancied popping in for a chat.

As many tower climbers do, the man came equipped with suction pads and a harness and carried a rucksak.

Trump Tower is a 58 storey block in the expensive Manhattan area of New York City. The building features a near all glass façade. Panels needed to be removed (a complicated process) in order for NYPD officers to persuade the ascendant to come in - where he was promptly arrested and taken way by suits who are thought to be FBI. He had been up the tower for three hours at that point and had weaved around the building to avoid the police attention - necessitating more than one panel to be removed. Special teams from the New York Fire Brigade were also on hand. One team was deployed to an exterior access platform to try and coax the man to safety.

Later in the day it was the NYPD that announced they believed the climber had no malicious intentions - but that he would be undergoing a psychiatric examination. He had posted a YouTube message to Trump...whilst wearing a black hoody!

Picture: Just a word in your shell-like - climber just wanted a chat with Trump

In a globally connected world, a great many companies have staff that travel both locally and overseas, making it more important to have an effective emergency...