Blackfriars - South Side Project Gets the Go-ahead 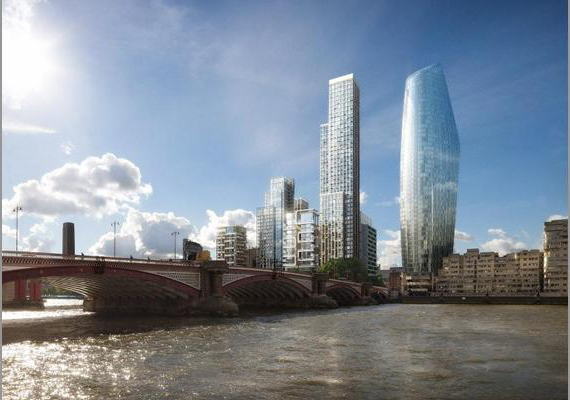 Global alternative asset manager The Carlyle Group has just announced that the Southwark Council Strategic Planning Committee has approved Carlyle’s planning application to replace the Sampson House data-centre and Ludgate House office building with a 1.4 millionsq.ft office and residential regeneration project on the south bank of the River Thames across from the City of London.

In addition, the London Borough of Southwark, the Greater London Authority and Transport for London will get around £75million in a Section 106 investment as a result of the development – with £65million going to ‘affordable homes’ and £10million to public spaces, improvements to sports and leisure provision, education, transport, health, community facilities and employment training.

PLP Architecture will design the project. There will be nine new buildings, the tallest of which will be a 48 storey residential tower, which together with the adjacent ‘One Blackfriars’ development, will form create a new London landmark on the south side of Blackfriars Bridge, connecting the City and Southwark.  Three of the new buildings will be on the western Ludgate House side of the site, with the remaining six constructed on the eastern Sampson House location.  Residential buildings will be positioned towards the north end of the site, allowing homeowners to capitalise on the riverside location – a decision that calls into question the affordability of ‘affordable homes’.

The offices will offer space arranged over flexible floorplates from 2,500sq.ft – 13,500sq.ft in size, to suit a range of business from multi-national organisations to local firms. All buildings will be built to high levels of sustainability and energy efficiency.

The project will be delivered in multiple phases following the lease expiries of the current tenants at Ludgate House in Q1 2015, and Sampson House in Q2 2018, and it is anticipated that works will be completed between mid-2020 and early 2023.