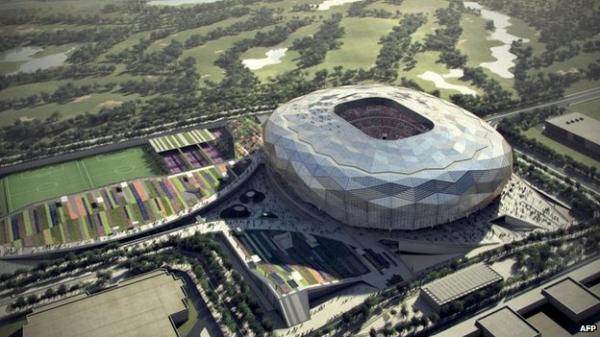 A BBC investigation has exposed 'suspect' dealings in Qatar and its 2022 World Cup development that suggests some officials are making lots of 'bread' in bribery payments whilst the workers are left to shout Doh!

As if matters could not get any worse for the 2022 World Cup in the Middle East state of Qatar, a BBC investigation has uncovered what it argues is widespread bribery in its £200 billion project.

The respected journalist, Sue Lloyd-Roberts, has reported that her team ‘have uncovered worrying testimony about pay, housing conditions and safety standards from foreign workers. They include some employed by subcontractors working for one of Britain's biggest construction firms, Carillion, based in Wolverhampton.’

Well over 1,000 migrant workers have been killed in work building or upgrading eight stadiums. The International Trade Union Confederation, has been recording the number of workers' deaths, and believes that figure could rise to 4,000 by the time the football competition begins in 2022.

The BBC report looked at the working and living conditions of some of them by covert filming and interviews. The workers stated that they had to travel over an hour from where they were living in camps that were cramped and unsanitary. They worked in the capital, Doha, for about 12 hours a day, often with little in the way of safety equipment, or proper treatment for injuries. Many reported there had been delays in payment which their families at home depended upon.

In response, Carillion issued a statement saying that ‘health and safety is at the very heart of our business, and practice on site follows standards that we apply in the UK’ which may concern those working in this country if the case. It went on to insist that subcontractors ‘must abide by Qatari labour law in respect of wages, living conditions and employment rights….and we expect them to comply with Qatari law which prevents employers withholding workers' passports’.

However, much of the discontent surrounds the imposition of kafala law that binds the workers to employers where they cannot change jobs or leave the country without an exit visa.

An estimated 1.5 million migrant workers live in Qatar and make up 94% of the population, many coming from Nepal, Bangladesh, Sri Lanka, the Philippines and India. The remaining 6% are native Qataris with a lifestyle that is vastly different from those that often live in camps. Trades unions are banned in Qatar and there are currently 100 threatened with deporting because they were threatening to strike.

Picture: Behind the impressive images of the stadiums being built in Qatar is a very different story of workers living and working in primitive conditions