Bumpy Start to a Disc-less World 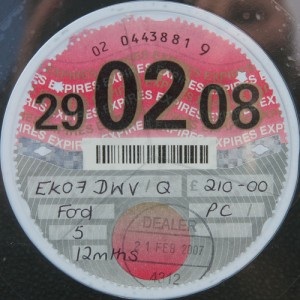 The 1 October was publicised as being a red-letter day when tax discs in the windscreens of UK vehicles were no longer required.

Instead, thousands of visitors to the Driver and Vehicle Licensing Agency (DVLA)website found they were not able to renew their vehicle tax as the system that went live this Wednesday crashed. The BBC reported that it had received stories of motorists spending up to 13 hours online in desperate efforts to stay on the right side of the law.

For its part, the DVLA bleated that the website had experienced ‘an unprecedented volume of traffic’. It remarked that 30,000 more people had visited the site compared with the same day last year; a point that many felt should have been taken into account by the agency when it brought in the new system. The DVLA has suggested that those still unable to use the website for paying, should go to their local Post Office. (When TWIFM went on the website, it found no advice or statement from the DVLA on the problem.)

The RAC had already reported that many vehicle owners (36%) were uncertain about how well the new system would work as well as being ignorant about it and when it was to come into operation.

On top of that, 63% of motorists surveyed feared that scrapping the paper tax disc will result in a rise in the number of untaxed cars on the roads and a further 44% believed it would actually encourage people to break the law. For its part, the Department of Transport was confident that modern ways of detection and administration would more than offset those prepared to take the risk of not taxing their vehicles or taking out insurance.

This viewpoint has been challenged by the RAC. “Although there is a network of fixed Automatic Number Plate Recognition (ANPR) cameras in urban areas and on motorways and trunk roads, there are inevitably fewer in rural areas,” stated David Bizley, RAC chief engineer. “And, while police officers have the ability to identify untaxed vehicles, they don’t have the capacity to take on an additional workload.”

Mr Bizley stated that if a similar number of drivers avoided paying car tax as failed to insure their vehicles, “we could be looking at around £167 million of lost revenues to the Treasury, far exceeding the £10 million that will be saved by no longer having to print tax discs and post them to vehicle owners.”

Picture: Goodbye to all that – the end of needing a tax disc displayed in UK vehicle windscreens has not had an auspicious start as thousands failed to pay online when the DVLA’s system crashed