Digesting the Damage at the Rennie 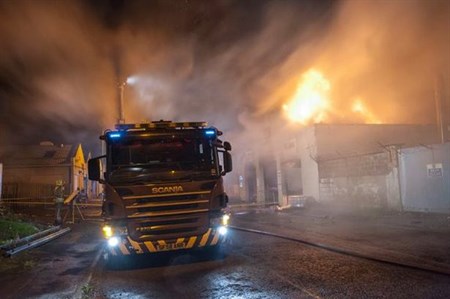 “The GSA is currently implementing its plan to retrieve the student works, its archive and collections from the Mackintosh Building” said Professor Tom inns, Director of the GSA.

“The first priority is to retrieve any of our archive and collections in need of immediate conservation, followed by the student work which will where necessary be given over to experts for conservation work to be undertaken. Other items will then be systematically retrieved.”

The art school will be working with a number of expert organisations to undertake this work including Constantine Art Movers.

The GSA also confirmed that the 1897-99 part of the building has survived intact. This includes the Director’s Office and Studio, Mackintosh Museum, Mackintosh Room, Board Room and Furniture Gallery. The GSA Archives have also survived.

The main part of the damage is in the 1907- 09 part of the building (the west wing). At this point it is not possible to confirm the extent of the impact beyond the fact that the library and studio above were sadly lost in the blaze, although it seems certain that the infrastructure of the Mackintosh Lecture Theatre is intact.

Professor Inns once again reiterated his thanks to the Scottish Fire and Rescue Service and to the thousands of people who have sent messages of support and offers of assistance.

“The SFRC did not simply go the extra mile but a marathon in their efforts to ensure that the as much of the Mackintosh Building and student work as possible was protected,” said Professor Inns. “We have been overwhelmed by the number of messages of support from the local community in Glasgow and friends across the world, and the generosity of individuals and organisations in offering expert assistance to help us in these difficult times.”

Over the weekend Scottish Fire and Rescue Service (SFRS) crews remained at the Mackintosh Building in Glasgow City Centre following the intense blaze that began on Friday afternoon.

Around 200 firefighters have been involved since the start of the operation, which at its height saw 16 appliances at the scene.

Crews battled for hours to save the building and as many of its contents as possible. Their efforts successfully ensured 90 per cent of the structure remains viable and recovered around 70 per cent of the items inside.

SFRS Chief Officer Alasdair Hay said: "The firefighters who responded to this incident demonstrated incredible courage, skill and determination to prevent the complete destruction of this iconic building and its contents.

"Choosing to fight a fire of this scale from inside the building is a risk for firefighters and requires the highest standards of professionalism.

"Those involved in this incident were predominantly drawn from Greater Glasgow and they were certainly very aware of the importance of the Mackintosh to the city. We have all been conscious of the fact this is also a building that houses the hard work of Glasgow School of Art students, especially at this time of year.

"By working very closely with staff from the art school, we were able to identify items and target our efforts to recover items of great importance and save everything that could possibly be saved.

"Efforts to stop the fire from spreading throughout the building were helped by the early decisions taken by our initial responders and incident commanders.

"They very quickly identified where the fire could be stopped and the aggressive firefighting operations over the following hours successfully ensured the fire did not go beyond this and engulf the entire building."

With the fire largely extinguished and salvage operations continuing, SFRS crews remained to dampen down hotspots and search for signs of hidden fire spread.

Specialist officers from the Fire Investigation Unit attended the scene and will work closely with Police Scotland to determine the circumstances surrounding the fire.

Glasgow City Council building control officers also attended and will work with the Glasgow School of Art to maintain the integrity of the structure.

Major fire at an industrial estate in Larkhall

The weekend saw no respite for SFRS – West with a round of domestic fires and road accidents along with a major incident that saw  twelve appliances attended a fire at Strutherhill Industrial Estate (pictured). Over 70 firefighters battled the blaze Saturday night (24 May).

Several of the appliances and firefighters had been on duty  at the Mackintosh building.

The incident was reported to Johnstone Control at around 11.25pm and appliances from Larkhall and Motherwell attended the scene within six minutes. Crews were faced with a well established fire at a single storey factory unit, measuring 30m x 40m.

Crews split the fire into four sectors and used one main jet in each. A hosereel jet was also in use and firefighters worked through the night to bring the fire under control, with relief crews being brought in when required.

Firefighters spent the early hours of Sunday morning damping down the fire and they used a thermal imaging camera to check for hot spots once the fire was brought under control.

A fire investigation is ongoing to establish the cause of the blaze.