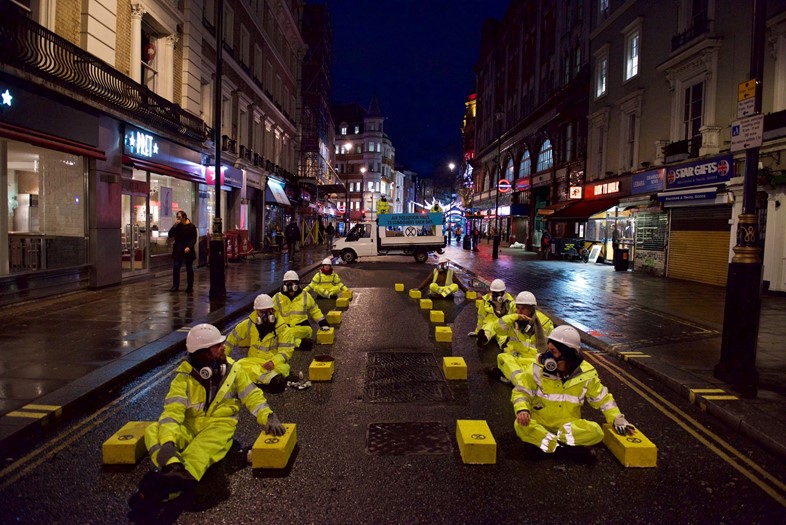 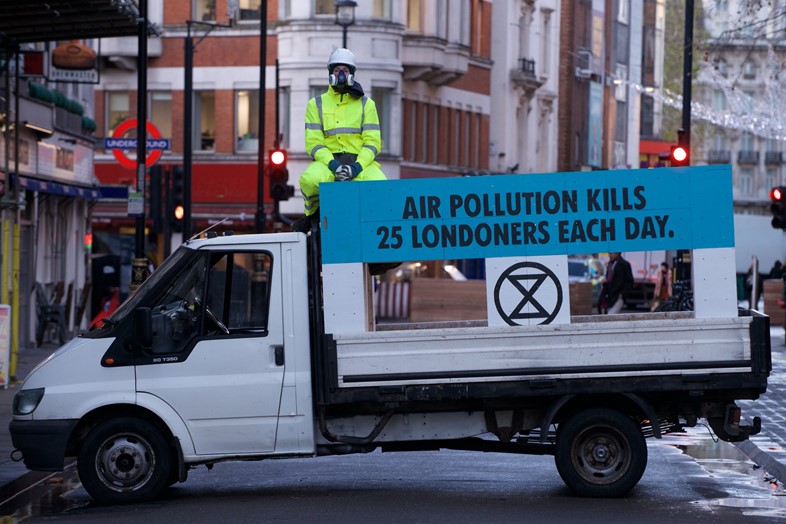 They're back again! The morning of December 6 saw Extinction Rebellion activists block roads - with the threat to cause more and more disruption misery throughout election week.

Meanwhile, hunger strikers are into a fourth week of protesting outside Conservative HQ in Westminster.

Eight Rebels blocked Cranbourne Street outside Leicester Square Station by gluing themselves to yellow breeze blocks which in turn had been glued to the road. A flatbed truck was also pulled across the street.

There were 25 breeze blocks, said to symbolise the twenty-five Londoners who die each day as a result of air pollution said Extinction Rebellion.

The road was chosen for its recognised high levels of air pollution.

In Manchester city centre, Great Ancoats Street was blockaded by Rebels with banners - motorist reported their journey times  multiplying by a factor of five.

Extinction Rebellion is asking candidates and leaders to support their Three Demands Bill. Seventy-five election candidates have now apparently pledged their support for the bill, with numbers growing daily.

The 'Bill', which is clearly not before Parliament but has been sent to MPs is:

To require the Prime Minister to declare a climate and ecological emergency.

To give the Secretary of State a duty to ensure that the UK achieves net zero emissions of greenhouse gases by 2025.

To establish a citizens’ assembly and related bodies to work in cooperation with the Secretary of State in achieving the net zero goal.

Extinction Rebellion have intimated at plans to cause more chaos in election week and throughout the festive season with a 12 days of crisis theme. The group normally reveal their plans in advance and apply for permits where required to do so. However, a demo planned for Heathrow on Sunday December 9 was clamped-down on by the Metropolitan Police.

Extinction Rebellion hunger strikers, including Peter Cole, a 76 year-old grandfather and emeritus professor of respiratory medicine, had invited the Prime Minister and the media to meet them outside Conservative Party Headquarters at midday on December 9.

Cole said: “I am well aware of the facts about air pollution and am deeply concerned that, unless we act now on the climate emergency, the lung damage that is already apparent in children in many parts of the UK will condemn them to ongoing and possibly fatal lung disease as they grow up.”

The hunger strikers invited all party leaders to meet them to discuss the Three Demands Bill. However, only one leader, Plaid Cymru’s Adam Price, turned up. The deputy leaders of Labour and the Liberal Democrats did make a showing. The Green Party sent 'senior members' - but not the Leader or even the Deputy Leader.

Picture: Gareth Morris images from London with thanks to Extinction Rebellion.