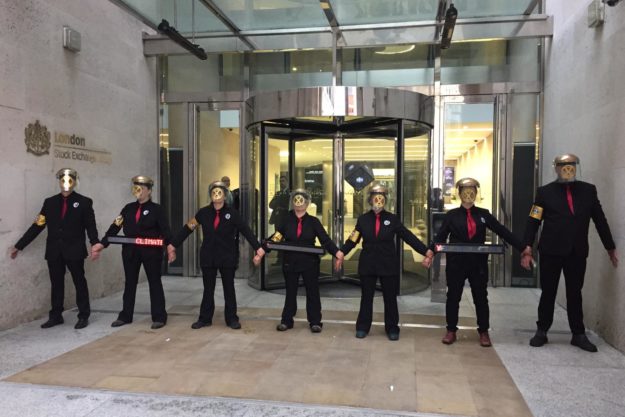 Thirteeen Extinction Rebellion members glued themselves to front and back entrances at the London Stock Exchange on the morning of Thursday April 25  as the activist group turned its focus on the City of London's financial centre.

Another group of protesters also climbed on to the roof of a DLR train carriage at Canary Wharf. Last week, a similar stunt saw the Docklands Light Railway halted as police took measures to remove another group safely.

The protestors at both sites were removed by 9:35am.

The thirteen at  the London Stock Exchange were described as acting in 'Robocop style' by Extinction Rebellion's press officer - Extinction Rebellion are extremely well organised. Coverage of the protests on Thursday were ensured by a well co-ordinated campaign to notify the press. The previous week's protests attracted a huge national and international debate, with UK politicians keen to be seen not to be anti the Rebellion per se.

Extinction Rebellion's aim this time around is to 'demand the finance industry tells the truth about the climate and ecological emergency and the devastating impact the industry has on our planet'.

An Extinction Rebellion spokesperson told ThisWeekinFM on the morning of Thursday 25: "There are at least seven protestors glued on to the front and back entrances preventing people from entering." Having contacted the London Stock Exchange and the City of London police, ThisWeekinFM was only able to confirm the seven at the front entrance. It is believed there were a further six at the back entrance.

Having asked for a further statement on the level of disruption from the London Stock Exchange, the initial response was 'No Comment'. A subsequent release said no disruption had been caused to trading.

Though wearing masks at the scene, the London Stock Exchange protesters are happy to reveal their identities, their occupations and ages in order to confirm they are concerned citizens (not 'just a bunch of hippies')  They are Alan Heath, 55, research scientist; Jen Witts, 38, support worker for vulnerable people; Sian Vaughan 53, retired head teacher; Debbie Rees, 57, Gardener and artist; Kef Shimidzu, 55, tutor and learning support worker; Lucy Galvin, 53, civil servant; and Johnny Woon, 60, retired.

The six at the back of the building may include Ben Barrage, 42, tree surgeon; and Dr Sandy Biden-Hoskins, 64, doctor of archeology.

The protestors are dressed in suits with masks on their faces with the golden Extinction symbol painted on them. On their chests they have text on financial ticker style LED screens saying: ‘tell the truth’, ‘climate emergency’ and ‘you can’t eat money’.

A support worker at the London Stock Exchange, not giving his name for job security considerations, said: “I’ve been telling people this would happen for years."

Via Twitter, the City of London police reported 'disruption is anticipated in the City today due to Extinction Rebellion's fortnight of action. It's likely the whole of the City will experience disruption to roads and the transport network'. The Tweet included an image of protestors blocking traffic at the Bank of England interchange.