Far from Being Academic 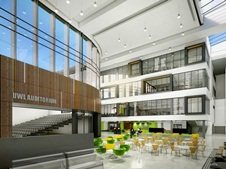 Willmott Dixon has been appointed by the University of West London for a £27 million contact to deliver the second phase of its Future Campus project.

Procured through Scape, it will see Willmott Dixon redevelop the university’s St Mary’s road site in Ealing and follows the completion of Phase One that included the renovation and refit of the Students’ Union building.

Phase two will create a new library, refectory, bookshop and a social Heart space in the center of the campus, much of which will be accessible to the local community as a new cultural centre and arts’ hub.

The project brings under one roof facilities dispersed in various buildings on campus to provide a better utilised estate with a ‘vibrant’ new hub.

Willmott Dixon’s project will also ‘future-proof’ the university by adding flexible learning spaces that can adapt to the changing needs of learning.