Downpours Bring The Roof Down 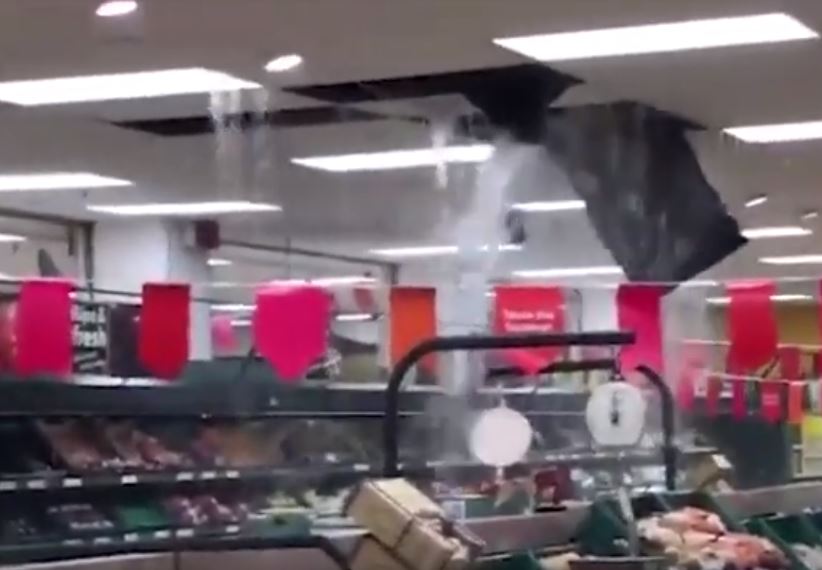 June 24 saw the Met Office warn of heavy storms - and almost as the alerts went out, Stirling University and the local Tesco felt the full force of nature.

The Met Office began the week forecasting a period of hot and humid weather for the week with heavy storms, lightening & thunder and flooding. Stirling in Scotland was the first to be hit - flash flooding causing problems across the city and at the famous university. Under the strain of one week's worth of rain falling in just 60 minutes, the Stirling branch of Tesco had its roof fall in.

That was Monday evening. Tuesday morning saw Danger to Life warnings that had been posted across the country because of the storms, replaced by Heat Health Alerts issued for Thursday until late Saturday in conjunction with Public Health England.

As the Tesco on Wallace Street was evacuated, one YouTuber grabbed some footage showing the ceiling collapsing in several areas as rain water took its toll.

A Tesco spokesperson said: “Our Stirling Superstore has unfortunately been impacted by Monday’s adverse weather. The store will remain closed  (Tuesday) while we work with our maintenance team to ensure the store is safe for colleagues and customers.”

Elsewhere in Stirling, boats were put to good use to rescue people stranded by rising water levels. The university was overwhelmed when a torrent burst through an entrance. However, contingency plans allowed an efficient relocation. the uni's graphics department was the worst hit. They Tweeted 'After the flash flooding in the local area on the evening of 24 June 2019, Graphics & Print have been temporarily moved and are currently partially operational'.

Nearby Edinburgh was also hit - with the flash flooding mostly causing problems to motorists and tram users. The Met Office said  nearly two inches of rain fell in three hours in the city. Some of the older sites in the Scottish capital, closed their doors to stop water leaking in to the buildings.

The storms that saw many areas of the UK hit with a deluge along with high winds were blamed on a 'bubble' of warm air from the south hitting cooler air coming from the west. Next up is an African plume of hot air, again from the south, bringing 35 degree Celsius temperatures in the UK (higher in Europe) along with high humidity.

After thunderstorms and heavy rain, the Met Office predicted that it would turn drier and more settled across the UK.

Met Office Chief Meteorologist, Steve Willington, said on Tuesday: “It’s going to get very warm across parts of the west and south-west of the country from Wednesday and it’ll feel hot in places across southern and western parts of the UK by Friday, with temperatures possibly reaching 30 Celsius in a few spots. Not everywhere will see the high temperatures, however, as an easterly breeze will keep North Sea coasts much cooler.

“By Saturday the warmth will spread further east with temperatures into the low 30s Celsius in places, while further west much fresher but still warm conditions, are expected. Fresher conditions will then spread to all parts of the UK by late Sunday.”

Willington continued: “Localised heatwaves are possible in a few places across the UK by Saturday.

"It’ll feel muggy for many this week, especially overnight as temperatures are likely to stay into the high teens and possibly low 20s Celsius in urban areas.”

Temperatures are also rising across large parts of continental Europe this week, with temperatures into the mid-30s Celsius expected and in some places rising to high-30s and low-40s Celsius, especially across France and Spain towards the end of the week.

A heatwave is an extended period of hot weather relative to the expected conditions of the area at that time of year. A UK heatwave threshold is met when a location records a period of at least three consecutive days with daily maximum temperatures meeting or exceeding the heatwave temperature threshold. The threshold varies by UK county.

Picture: A Tesco in Stirling was evacuated as heavy rain caused the ceiling to come down.