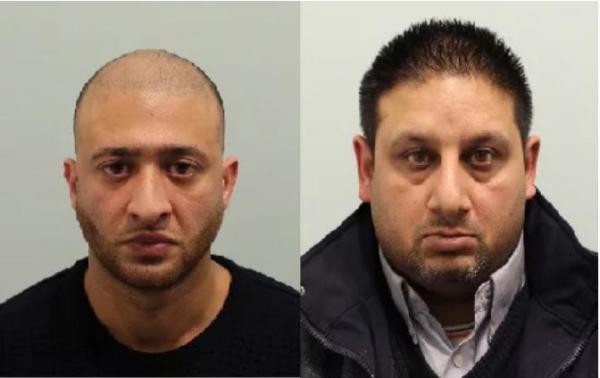 Two former security guards have been found guilty of a conspiracy to steal £7 million after a three week trial at Kingston Crown Court.

Mohammed Naheen Siddique, 32 and Ranjeev Singh, 40, both from from Slough, staged a robbery in an attempt to steal 19 bags of cash due to be transported to the Bank of Ireland.

The pair, who both worked for the cash handling company Loomis, were caught as the result of an investigation by the Met’s Flying Squad.

The court heard Siddique and Singh were working together on the same shift on Tuesday, March 14  and had been tasked with picking up £7 million in cash from the British Airways cargo depot at Heathrow Airport.

Analysis of CCTV footage revealed that, shortly after the money was picked up at 8:30am, the Loomis van pulled over outside the security gates to allow Singh to use the toilet.

This was an unauthorised stop and against all Loomis protocols and instructions, which stated that if an operative needed such a stop then he/she should call into the control centre so that closer monitoring of the van could occur.

While Singh was in the toilet, Siddique drove off and then parked a short distance away in West View, Feltham.

Singh took 20 minutes to raise the alarm with his employer. When asked whether he had tried to contact Siddique, he said he did not have his phone.

The delay in alerting the Loomis control centre enabled Siddique, who was helped by another man, to unload the bags of cash into a white Transit van.

In order to create the impression of a robbery, Siddique’s hands and ankles were bound with cable ties and he was left on a service road near the M40 in Buckinghamshire. Siddique was later found by a member of the public at 11.15pm.

Flying Squad detectives arrested Singh and Siddique after suspicions were raised by Singh’s inexplicable delay in raising the alarm and Siddique’s inconsistent account of what had happened.

During an interview in which he was being treated as a witness, Siddique claimed the theft had been organised by a man who had threatened to burn his house down.

However, analysis of a mobile phone found on Singh, - despite his claims that he didn’t have one - revealed that it had been used to call Siddique during the period the cash was stolen.

The phone cell analysis also revealed Rafaqat Hussain, who previously pleaded guilty to the conspiracy to steal, had been in regular contact with Singh on the day of the theft.

Flying Squad detectives established that Hussain had called a recovery driver at 9.24am on the day of the theft and the white Ford transit van, parked a short distance from Hussain’s house, had been loaded on to a vehicle transporter and taken to a nearby recycling centre where it was scrapped.

Hussain’s wife Razvana Zeib was arrested and charged with conspiracy to commit money laundering after investigations revealed £900,000 had been transferred to a Pakistani bank account opened in her name.

Zeib and another defendant, Gary Carrod, were also charged with conspiracy to burgle after a house in Stoke Poges, which Hussain was planning to buy at a knockdown price, was burgled and ransacked.

Detective Chief Inspector Mark Bedford, of the Met’s Flying Squad, said: “Although this was an organised theft involving months of planning, it would not have been possible without the calculating and devious actions of Singh and Siddique who abused their positions to subvert the secure processes put in place to prevent this type of offence.

“The pair attempted to present themselves as victims of a robbery even going so far as arranging for Siddique to be tied up and left by a motorway to be found by innocent members of the public.

“However, a swift and thorough investigation by the Flying Squad uncovered their lies, led to their accomplices being identified and ensured their successful conviction at court.

“Both men are now likely to receive substantial custodial sentences reflecting their calculated abuse of their employer's trust and the value of the monies stolen.”

A gang who targeted and violently attacked a security guard delivering cash to HSBC bank on Baker Street, W1 have been found guilty of conspiracy to commit robbery. A...