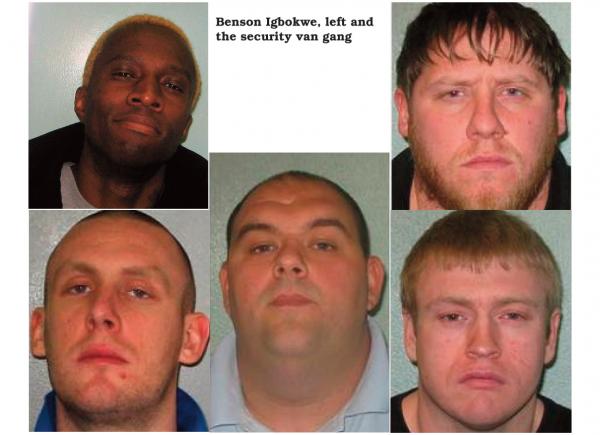 A gang who targeted and violently attacked a security guard delivering cash to HSBC bank on Baker Street, W1 have been found guilty of conspiracy to commit robbery. A detective in the case described it as 'an audacious robbery concocted by four individuals who gave no thought to their victim.'

Detectives from the Metropolitan Police Service's (MPS's) Flying Squad were aware of the plot and lay in wait for the criminals in the early hours of Friday, 3 October 2014. The operation was codenamed Morguld and continued after the event using 'snitches' and 'grasses' just like the tough team from the TV/movie The Sweeney' (Sweeney Todd/Flying Squad), to round up those not arrested on the day.

Twenty minutes prior to the robbery Smith was observed by detectives completing a recognisance of the bank and the surrounding area. Unbeknown to the gang detectives were watching their every move.

Tomlinson, who had been lying in wait in a nearby phone box waited until he saw the guard approach the bank before running from the phone booth. He kicked the guard to the ground and took the cash box. Despite being kicked and punched the guard only sustained minor injuries and did not require hospital treatment.

As Tomlinson fled across the street he was apprehended by detectives before he could reach Goldsmith who was waiting on a high powered motorbike.

Seeing that Tomlinson was being chased Goldsmith left without him, driving at speeds off around 80mph through the streets of London. Officers were unable to stop him and he escaped.

Detectives were aware that there were two further individuals involved - Smith who had carried out the recce of the bank prior to the robbery - and the driver of a white van seen in the vicinity in the lead up to the incident.

Arrest enquires ensued and just 40 minutes after the robbery, Goldsmith was observed leaving an address in St Mary's Green N2 and was arrested.

Later that evening Smith was seen by detectives returning to his home address and was arrested.

With one individual still outstanding officers continued carrying out enquires. On Thursday, 9 October 2014 McGee was seen leaving an address in Sherling Way and was promptly arrested. At the time of the offence McGee was entrusted with a van by his employer, which remained in his control over night. This was the same van - which contained both McGee and Goldsmith - seen in the area prior to the robbery.

Detective Sergeant Alan Stimson said: "This was an audacious robbery concocted by four individuals who gave no thought to their victim. Tomlinson subjected the security custodian to such a vicious attack he stood little chance in defending himself. I am pleased that the jury have found Goldsmith and Tomlinson guilty for the part they played in the conspiracy and Smith and McGee had no choice but to plead guilty due to the overwhelming evidence put before the court. I hope the convictions serve as a warning to those who insist on carrying out this type of crime."

Man jailed for plotting to kidnap

A man who plotted to kidnap an assistant manager of a Knightsbridge boutique store to get the store keys has been jailed. Benson Igbokwe, 44, of Darcy Road, SW16 was found guilty of conspiracy to kidnap and sentenced to ten years imprisonment at Isleworth Crown Court on last week.

The court heard how on 28 February 2013, the assistant manager of a boutique store in Knightsbridge had locked the store and was making her way home. As she got to the communal door to her flat in Shepherds Bush, she noticed two men wearing high visibility jackets standing outside the entrance. She opened the communal door and made her way into the courtyard, at which point one of the men approached her and pointed a handgun, whilst the other man blocked the door.

The victim, thinking he wanted to steal her handbag, offered it to him but the man shook his head and asked her for her keys. Unsure which keys he meant, the victim said she was only visiting a friend at which point the man asked her for the keys to the Knightsbridge store.

Gun to her head - daring escape

With the gun now pointing at her head, she tried to persuade the man that she did not have the keys, to which the man said: "Yes you do because you locked up tonight. We followed you."

The victim was then told to get into a van parked outside. The woman walked to the communal door and the second suspect opened it to let her out. As soon as she got outside, she ran to a nearby shop screaming for help and called police.

During the police investigation it was established that over several weeks, Igbokwe carried out surveillance on the woman, parking outside the store at closing time as well as outside her flat when she arrived home.

At one point, the victim became suspicious of the vehicle and made note of the registration number which was registered to Igbokwe.

Police enquiries also revealed that Igbokwe had hired a white van on the day of the offence and phone records showed that his mobile phone was being used within the vicinity of the store and her flat. He was arrested on 7 March 2013 and later charged with conspiracy to kidnap.

A second man was arrested on April 2013 and also charged with conspiracy to kidnap. He was later acquitted of the offence.

Acting Detective Sergeant Aretha Guernah from Hammersmith and Fulham CID said: "I cannot imagine the fear that the victim went through having a gun pointed at her head and knowing that the men were trying to kidnap her. I would like to praise her for her courage and bravery in having to recall this terrible ordeal over and over again whilst giving evidence to the courts and assisting with our investigation. I hope this sentence brings some comfort to the victim that a dangerous man has been locked up and a warning to others who look to follow in Igbokwe's footsteps that the police will catch you and bring you before the courts."