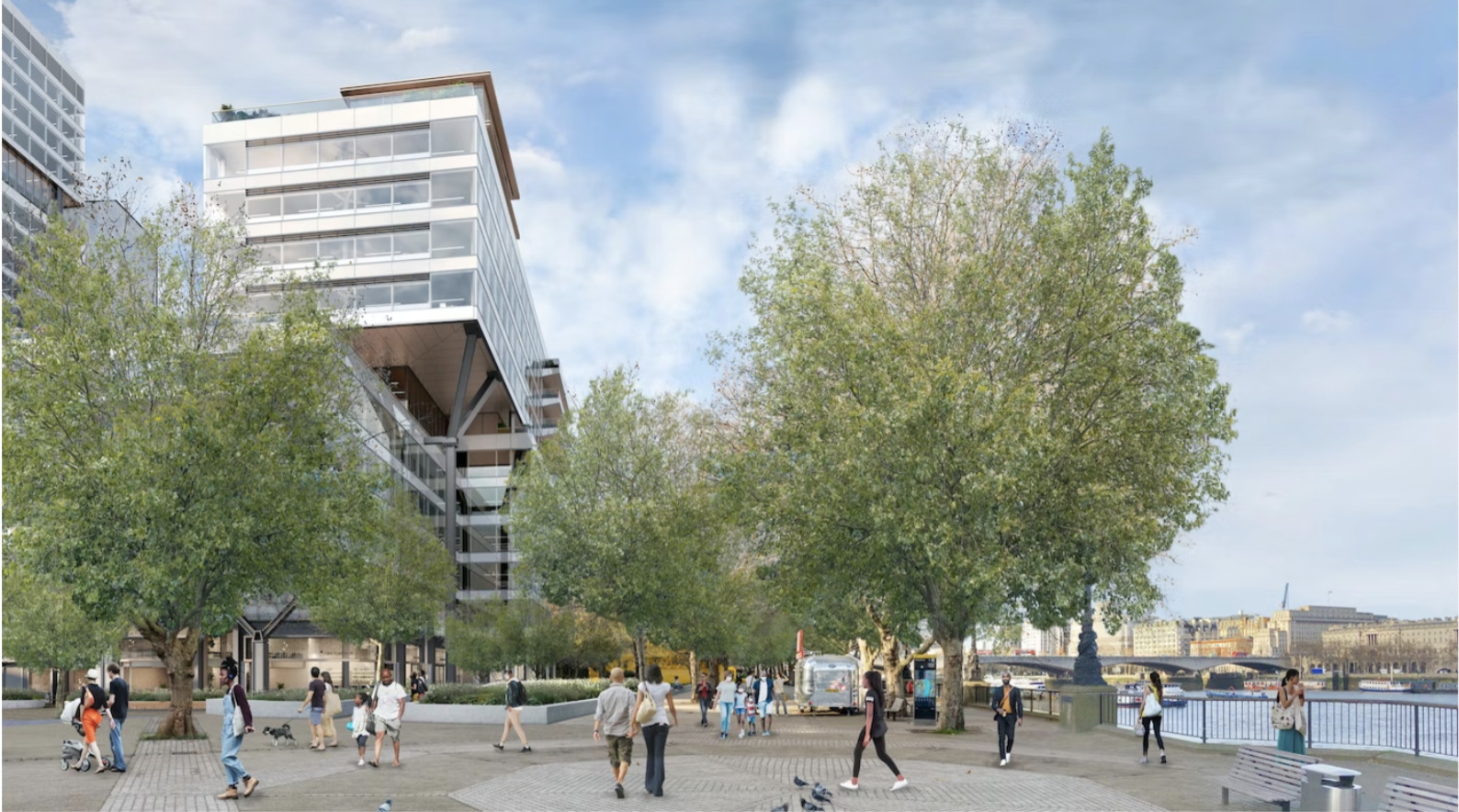 The former ITV Studios building at South Bank was due to be transformed into a 26-storey office tower, but redevelopment proposals will now go to a public inquiry.

What is 72 Upper Ground?

Mitsubishi Estate and CO—RE secured 72 Upper Ground, for £145.6m in November 2019. The proposals were designed by Make Architects and Lendlease was due to be a construction contractor.

40 per cent of the site at ground floor level was due to be dedicated to new pedestrian routes and two new public squares, including cafes, restaurants and green spaces. The site was also targeting net zero operational carbon, BREEAM Outstanding and WELL Platinum, through sustainability elements such as integrated solar shading and air-source heat pumps.

Targeting completion in 2026, plans for the scheme (allegedly codenamed Project Vista) were initially approved by Lambeth Council in March 2022. Communities Secretary Michael Gove halted them in May of the same year, by issuing an Article 31 direction.

Campaigners from groups such as the Coin Street Community Group have long been lobbying the government to order a full public inquiry on the development, raising concerns about the effect on nearby listed buildings: the National Theatre and IBM Building.

Despite plans claiming that respecting the character of the area was a key driver for the project, one of the main oppositions to the development is that 72 Upper Ground might damage the appearance of London’s skyline.

He continued: “The impacts on daylight received by adjacent Coin Street housing co-operatives will be severe. The riverside walkway and gardens to the north of the proposed development currently enjoy sunshine throughout the lunchtime peak and afternoon but would be cast into shadow by this development. The wanton disregard of the South Bank, one of London’s most popular amenities, is unacceptable and short-sighted!”

The Twentieth Century Society also objected to the plans, claiming that the site would significantly harm the character of the designated conservation area:

“The new development will impact close views of the listed buildings from the Queen’s Page 3 Walk and it will also impede wide views, particularly views of the National Theatre from Blackfriars Bridge to the east…The Society’s Casework Committee believes the proposed new building in its current form would harm the setting of the listed buildings on the site and harm the special character and appearance of the riverfront site, which is both a designated conservation area and positive contributor to a strategic view in London.”

CO-RE and Mitsubishi Estate’s statement, published in full by building.co.uk, expresses disappointment with the delays to construction plans, highlighting that the area requires “desperate” investment.

It reads: “72 Upper Ground will bring investment, over 4,000 new jobs, and new workspace to one of London’s most famous destinations. Crucially, it will benefit the local community through the London Studios, which will provide 40,000 sq ft net of affordable space that is tailored to the needs of Lambeth’s emerging creative industries. This includes new cultural venues that have rehearsal space, gallery and presentation spaces and soundproofed studios, alongside new riverside cafes and restaurants.”

The plans will now go to a  public inquiry overseen by an independent planning inspector, with details to be announced in due course.

Picture: an image showing the proposed site. All redevelopment images are courtesy of Make Architects