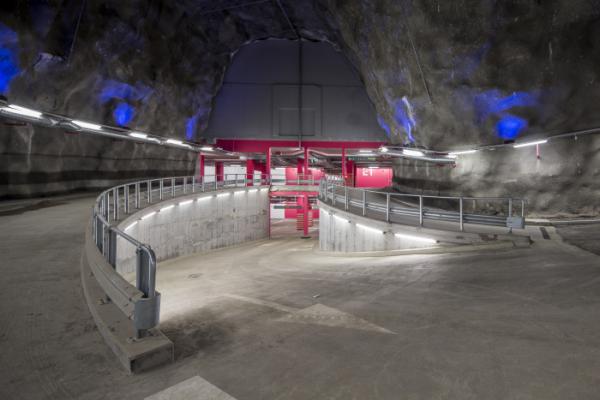 Swedish designer ÅF has provided the technical installations in a super-sized underground parking garage which has won a prestigious Stockholm building industry award.

With 47,000sqm and approximately 1,000 parking spaces, the Bergrumsgaraget underground parking garage is the largest one in Sweden.

The caverns are situated in Årstadal, Stockholm, hollowed out of the rock behind the Liljeholmskajen seafront. Creating a parking garage here also enabled the developer, JM, to build an additional 600 new flats in the area.

ÅF has delivered heating, ventilation and air conditioning as well as sprinkler and building monitoring systems.

”Heating a cold and damp old cavern isn’t easy,” said Mr Olof Hägg, who has been in charge of the project from 2003. “But we have managed to create a good climate down there with district heating, air circulation and a drainage system. Levels of energy consumption and noise are low and we have been very careful to put safety first.”

The developer, JM, has invited ÅF to participate in a similar project in a number of oil storage units on Kvarnholmen island.

The ROT award which ÅF won was instigated by the Stockholm Byggmästareförening building industry association to promote the re-purposing of property in Stockholm.

Picture: The award winning work done by ÅF on Bergrumsgaraget underground parking garage has been a major achievement