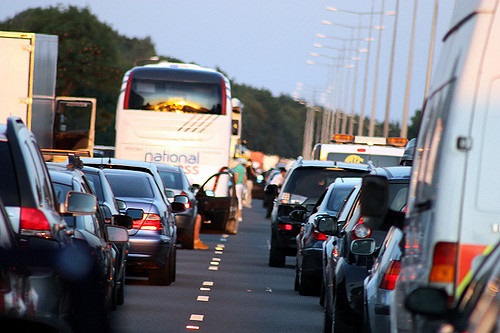 As road closures for roadworks spring up all around the country in time to cause the summer's traditional traffic chaos, the government has announced a £6.1 billion programme of road improvements announced as part of a £23 billion upgrade to the road network in England.

Over the coming 6 months, the government will take the next steps on 55 road improvements across the country, including opening 8 schemes, consulting on 10 schemes and publishing final plans for another 29 schemes.

Jesse Norman said: "Over the next 6 months we expect to roll out our vital upgrade plan. I will also be announcing the winners of the 2017 to 2018 highways maintenance challenge fund, where the government will be investing £75 million to improve smaller local roads through resurfacing, filling potholes and other infrastructure projects.

"Upgrades include adding capacity to sections of the A1 in Northumberland. Road users will also see proposals to increase capacity at the A12 Colchester Bypass and a corridor to the south-west via the A303. Other improvements include a more efficient Junction 19 on the M6 and an upgrade to the link between the Port of Liverpool and the motorway network."

The schemes will be delivered by Highways England, which is responsible for the country’s motorways and main trunk roads. This includes the route for the new A19 Downhill Lane junction which will support a new international manufacturing park by increasing road capacity, easing traffic and improving safety.

Steve Gooding, director of the RAC Foundation, said: "The first five-year road investment strategy reassured millions of drivers and businesses that their long-term travel needs were at last being taken seriously and provided for. But the fear has always been that road programmes, like the morning mists, have a tendency to fade away before our eyes. This latest unveiling is therefore a particularly welcome demonstration that the promised money is not only available but is being spent on schemes that really matter and that our calls to remember the local roads - where our journeys begin and end - are being heard."

Picture: It's getting better - road improvements will cause delays but result in better journeys in future. N.B. The eternal roadworks on the M3 are due to come to an end. Much will be 'smart motorway' - unfortunately still run by thick people

Drivers near Beaconsfield were being advised to allow extra time for their journeys on the morning of Thursday 22, as Lane 1 on the London-bound M40 remained closed...

Less Street Lighting is Not a Dim Idea

Led by researchers from the London School of Hygiene & Tropical Medicine in partnership with UCL, a study suggests that local authorities can ‘safely’...

The Future Of The Company CarÂ