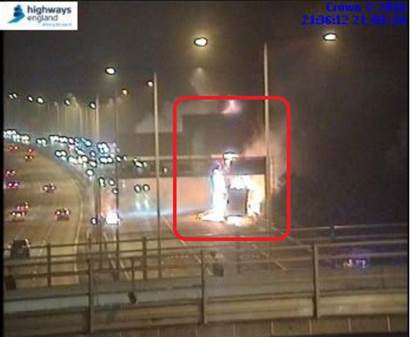 Drivers near Beaconsfield were being advised to allow extra time for their journeys on the morning of Thursday 22, as Lane 1 on the London-bound M40 remained closed between Junctions 2 and 1A because a 96-tonne crane caught fire after a significant spillage of hydraulic fluid the night before.

Highways England and its service provider assisted Thames Valley Fire Control Service and Thames Valley Police overnight to deal with the intense fire. A specialist lifting team removed the crane from Lane 1 and the hard shoulder on Thursday morning - debris was then removed from the motorway.

The lane closure remained in place all day for safety reasons due to serious damage on the road surface, which was planned to be resurfaced on Thursday night.

Mobile crane on fire, M40 southbound between junctions 2 (Beaconsfield) and 1a (M25 interchange). Two appliances and crews from Beaconsfield, one from Gerrards Cross, two from High Wycombe, one from Princes Risborough, one from Langley and one from Maidenhead attended, along with four officers. Firefighters used compressed air foam, main jets, hose reels, breathing apparatus and a water tanker.

Advice to drivers in roadworks:

Keep within the speed limit.

Get into the correct lane in good time – don’t keep switching.

Concentrate on the road ahead, not the roadworks.

Be alert for works’ traffic leaving or entering roadworks.

Keep a safe distance – there could be queues in front.

Observe all signs – they are there to help you.

And be alert for road workers, the roads are their workplace.