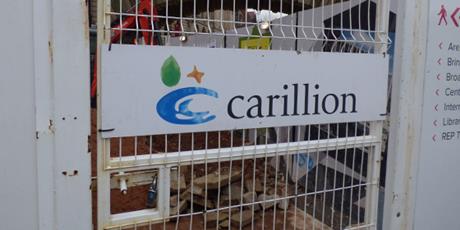 Emma Mercer, Carillion's chief financial officer of just six weeks, is said to be the whistle blower who brought the house of cards tumbling down.

Former Carillion executives have appeared at Parliament before a scathing joint Public Accounts Committee Public Administration and Constitutional Affairs Committee (with access to notes form a previous appearance before a joint Work and Pensions and Business, Energy and Industrial Strategy committee) and it seems the firm's recently appointed chief financial officer was slammed by her colleagues for being a whistle blower as she questioned financial reporting irregularities and the parlous state of the company's finances.

She did eventually go through official 'whistle blowing' procedures and thus was instrumental in the Carillion house of cards tumbling.

Prior to the inquisition, minutes from meeting of the Board of Directors had come to light  showing Emma Mercer, who had only been in post as Finance Director for a short time, was raising accounting irregularities to her colleagues who described her forthright opinions as whistle blowing.

Transcripts from the Joint Committee hearing show that just six weeks in to her appointment, Mercer had travelled to Canada (where Carillion's operations were about to be put up for sale to help salvage the global company's fortunes). On her return she queried Carillion's accounts and what had been revealed to investors and the government. Her male colleagues rounded on her and accused her of about to go whistle blowing.

She did not blow the said whistle straight away and now stands accused of backing Cochrane up as he tried desperately to raise funds and pacify the company's bankers - ultimately to no avail. From mid-2017 he consistently claimed the company could bail itself out of difficulties and even expected the afore-mentioned bankers to allow Carillion to default on a re-payment schedule. They did not and the rest is history.

Mercer was instrumental in the decision to approach Carillion's bankers. Cochrane told the Committee: "I believed there was a logical case for financial support and I still can't understand why we didn't get it. We were not looking for a bail-out but short-term support to facilitate restructuring."

Frank Field, chairman of the Work and Pensions Committee, said: "Emma Mercer took just six weeks to spot and pull the thread that began the entire company unravelling. That the E had to go through whistle blowing procedures to get her concerns about accounting irregularities taken seriously by the Carillion board is extraordinary.

"So too is that the board's response was to reject an independent review and get KPMG, their pet rubber-stampers, to mark their own homework.

"While our witnesses have been reticent in oral testimony, these minutes begin to reveal the true picture of a company falling apart at the seams in full view of the board and their auditors."

Rachel Reeves, chairman of the Business, Energy and Industrial Strategy Select Committee, said: "Carillion directors say they couldn't foresee what investors and company staff could – that spiralling debt problems and failing contracts were destined to sink the company.

"These board minutes point to a very different scenario – Emma Mercer was sounding the alarm but none of the Carillion directors were willing to wake up and listen."

Picture: When Carillion closed-up shop, Emma Mercer, the chief financial officer of just six weeks, is said to be the whistle blower who brought the house of cards tumbling down

Greed On Stilts - Snouts In Carillion Trough Condemned By Parliament

A Parliamentary Committee has described the acts of former Carillion directors as 'greed on stilts', condemned 6.4m in payouts to advisors days before the company...