How to Energise Morale and Commitment 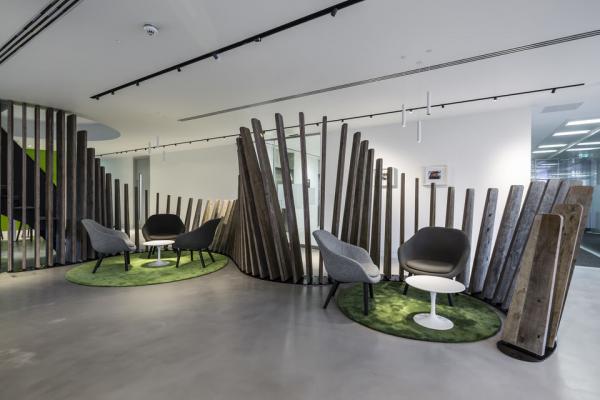 After 25 years in the same building Nordic bank SEB needed to find a new home in the City of London but one that would have a positive impact on its staff by imaginative design.

SEB selected a building with ‘stunning’ views of Wren’s St Paul’s Cathedral which had undergone extensive renovation to Cat A standards.

Workplace Design Consultancy, Burtt-Jones & Brewer, was awarded the design and realised its design needed to maximise the best possible views of the historic cathedral from the public spaces within the office and ensure that the premises projected a strong message of individuality.

The inspiration of the project came from a desire to physically link the business across the two occupied floors of the building, via a new staircase punctured through the structural slab of the dividing floor.

The location and design of the staircase was pivotal in providing this sense of connection. Formed next was the reception and client suite on the third floor, emerging on the second floor of the building within a large social space. Surrounding the staircase, resides a reclaimed timber open wall which forms a physical and ‘emotive’ barrier, rippling on to the floor, evoking the look of traditional Swedish fences and allowing a level of transparency but with the right, light surface finishes and pale timbers, accents of colours in flooring and furniture, against simple but robust architectural finishes such as slate, micro-screed floors and ceramic tiling.

Management and staff teams were also involved in altering the orientation, size and format of the Gym space.

Burtt-Jones & Brewer even reviewed and tested the desk system proposed – a sit–stand workstation option. “Involving staff early in the process means that they own the design and the outcome and it becomes an exciting part of communicating what’s to come,” explained Adam Burtt-Jones, Co-Founder, Burtt-Jones & Brewer.

The final, key lynchpin to the staff involvement process was an opportunity for staff to walk around the new space before any construction work started. Working with SEB, Burtt-Jones & Brewer produced a series of bespoke graphic boards and hosted evenings at the new office space. Through a series of staff workshops held during the project development, there remained a clear agenda to retain a domestic and friendly feel to the new space. The staff expressed a wish to retain the family feel.

“BJ&B worked closely with the project’s steering group from the outset to understand the behavioural and practical to the working aspects of the space and the image we wished to convey, so a fresh eye was taken to everything,” said Malcolm Crow, Head of Branch, SEB.

To keep costs tightly controlled, the project was traditionally tendered and it was delivered on budget due to the rigour and diligence of the project management and QS teams involved.

The responsive and responsible nature of all the consultants involved in the detailed design, including the discipline and control of the contracts team, meant that the project was delivered on time, incurring no additional costs for unscheduled delays.

“The care taken and attention to detail throughout the planning and delivery of the project is evidenced by the fact that the move occurred on time, under budget and with no unexpected last minute hitches of any kind,” stated Mr Crow. “Our employees are delighted and the enhanced practicality and modern design of the offices has resulted in a step-change in morale and commitment.”

Proof of the pudding

“The final result has already inspired our staff and clients,” said Hector Gorter, Head of Real Estate, SEB UK. “The large second floor space we call the Forum has been so successful, we’ve ordered more chairs to satisfy peak demand. The client reception and meeting suite has impressed clients and excelled expectations of both the global SEB workspace team and the group’s CEO.”

As an example of the guidance provided by Burtt-Jones & Brewer, the decision to commission and curate the artwork, along with the development of the graphics and brand content, has meant – along with other design ideas and decisions – that SEB believes is a truly special space, delivering to a level beyond its expectations.

Picture: Close collaboration between Nordic bank SEB and design specialist Burtt-Jones & Brewer, has resulted in a spectacular workplace for staff at its London offices close to St Paul’s Cathedral in London

In an age of fast paced technological innovation, people are increasingly equipped with the ability to work from anywhere at any time. While it is sometimes argued that...

Lifts/elevators in modern office buildings are creating unacceptable lift waiting times and burning as much more energy than predicted, new research reveals from...

Companies are increasingly prioritising employee needs when making business and property decisions, according to the latest annual European Occupier Survey by the...