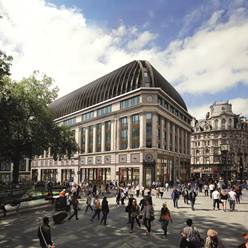 An impressive office and retail building has started construction in Leicester Square at the very heart of the West End in London.

The new 112,000sq.ft landmark headquarters office and retail building in Leicester Square, is underway and LSQ London reports that it is due for completion during the autumn of 2016.

Formerly known as 48 Leicester Square, LSQ London is an island site comprising the entire western side of Leicester Square, bounded by Panton Street, Whitcomb Street and Swiss Court. The new building will provide 95,000sq.ft of new Grade A offices over seven floors and 17,000sq.ft of retail space.

LSQ London believes the new building will play an important role in the regeneration of Leicester Square, and it will be accessed from a prominent new entrance on Panton Street, and the island site will have ‘outstanding levels’ of natural light and ‘stunning’ panoramic views. Designed by Make, the building is crowned with a contemporary bronze bladed structure.

Brookfield Multiplex is the main contractor for the transformation of the building with CORE the development manager, Make Architects as the architect, WT Partnership as quantity surveyors, Watermans as structural engineers and Hilson Moran as service engineers on the scheme.

“This project is a rare opportunity to consider a complete standalone building ‘in the round’, explained Frank Filskow, Principal Architect on the project at Make. “It has been an exciting challenge to reinvent 48 Leicester Square from the inside out, and to give the building a new identity by providing high quality office and retail space in this historic and yet culturally vibrant location.”

Pictured: How the new LSQ London building will look when it opens next year in Leicester Square, London.