Providing the IT Factor 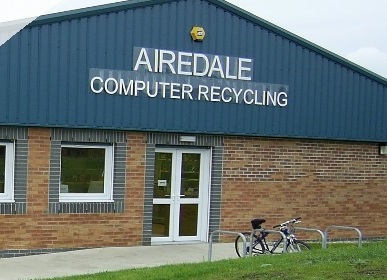 Premier Technical Services Group PLC (PTSG) has given 16 computers, screens and printers to Castleford based Airedale Computers, an organisation which retrains long-term unemployed people and returns them into the job market.

The unusable equipment was dismantled in-house by Airedale’s job centre and DWP work placement volunteers into component waste streams that can then be sold as raw materials. The volunteers are long-term unemployed and Airedale secures them a work record, real work experience and a reference to enable them to be in a better position in the job market.

All profits from its endeavours are given to its charity Chrysalis Youth & Community Project which runs THE HUT in Airedale, a community and sports facility run for the benefit of the local communities. Some of the equipment was also refurbished by Airedale’s apprentices and technicians for low cost sale in its three computer retail shops. Computers are also given free of charge to good causes such as scouts, cubs, sea and air cadets and for fundraising for charities and voluntary groups.

“In February Airedale Computers was called to PTSG to remove its excess IT equipment – 495kg in total,” said Keith Sorrell, Development Manager, Airedale Computers. “All of the equipment was logged into our database and hard drives containing sensitive data were removed and shredded for security. Often for hard drives with less sensitive data these are sanitised which overwrites every sector with zeros and ones, enabling us to reuse the drive. “PTSG received an electronic copy of the transfer note, asset trail and shredding log together with our thanks for supporting our charity. We are extremely grateful for PTSG’s support and look forward to hopefully working together again in the future.”

Picture:   PTSG has given computers, screens and printers to Castleford-based Airedale Computers.