The Mask of Zero? 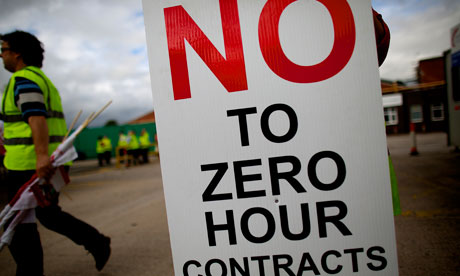 There appears to be no signs of any abatement in the row over zero hours contracts, following the announcement by the Government that claimants could lose benefits if they refuse this kind of employment ‘without good reason’. Meanwhile, the Opposition claims zero hour contracts are a devious means of masking the true numbers out of work.

The change has been due to the move to Universal Credit, which is being introduced throughout the country. The Office for National Statistics has estimated that the number of contracts that use this concept of workers being on standby but with no minimum hours had reached 1.4 million.

When asked this week about the move, a Government spokesperson stated Prime Minister, David Cameron was unapologetic: "He does think that it is right, as part of the introduction of Universal Credit, that there should be a requirement on people to take work opportunities that are offered," said the spokesperson.

However, there is some confusion about the amount of discretion that claimants on Jobseekers Allowance will experience from Jobcentre officials. Cameron’s spokesperson continued at the same meeting: "Individual decisions about tailored work requirements for people who are in receipt of taxpayer-funded benefits are taken on a case-by-case basis by jobcentre staff. But as a point of principle, should we be expecting people to seek employment in return for benefit, and do we have a system, in the Universal Credit, that is designed to respond to changing earnings? He does think that's the right approach."

The Government has already received support from bodies such as the Confederation of British Industry which has been on record as saying: “Flexible contracts provide opportunities for work and help people build careers,” stated Neil Carberry, CBI Director, Employment and Skills. “To focus on numbers is to miss the point – zero hour contracts are a small part of the labour market and provide benefits to businesses and workers. They offer a choice to those who want flexibility in the hours they work, such as students, parents and carers.”

Currently, 10% of the workforce has such contracts and women form the majority of the group.

The Labour Party and trades unions have, for the most part, lined up against zero hours contracts as they see that any advantages lie mainly with the employers. Complaints about how zero hours contracts are exploiting workers have been voiced for some time but the decision by the Government to use withdrawal of benefits as a lever, has increased concern.

"People are able to take zero hours contract jobs but that should be their choice,” explained Rachel Reeves, the Shadow Work and Pensions Secretary. “They shouldn't as a parent or somebody with caring responsibilities be forced into taking a job that you just can't do, that you can't match with the responsibilities that you've got as a mum or a dad or a carer.”

According to the Sloman Economics News Site: Part of the reason for the relatively good unemployment figures is the rise in zero hours contracts. These allow employers to cut the hours that people work without laying them off. People on zero hours contracts are classified as being in employment regardless of the number of hours they actually worked during the survey reference week. This includes anyone who was not required to work any hours during the reference week whilst remaining on their current contract of employment. The continued existence of the contract of employment is the key determinant of their employment status in these situations.