The Skyscraper's the Limit 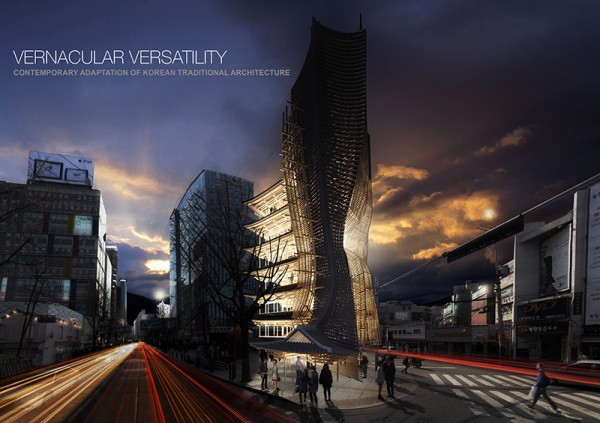 The results of an international competition to find the ‘outstanding ideas for vertical living’ have been announced by organizer by eVolo Magazine.

The 2014 edition marks the ninth anniversary of the competition established in 2006 to recognise outstanding use of technology, materials, programmes, aesthetics, and spatial organisations.

eVolo Magazine received 525 projects from 43 countries in all continents. The jury, formed by leaders of the architecture and design fields selected three winners and 20 honorable mentions.

First place was awarded to Yong Ju Lee from the USA for his project Vernacular Versatility. The proposal reinterprets traditional Korean architecture in a contemporary mixed-use high-rise.

Second place was awarded to Mark Talbot and Daniel Markiewicz from the USA for the project Car and Shell: or Marinetti’s Monster which proposes a city in the sky for Detroit, MI.

The recipients of the third place are YuHao Liu and Rui Wu from Canada for their project Propagate Skyscraper that investigates the structural use of carbon dioxide in skyscrapers.

Some of the honorable mentions include a skyscraper that filters the air of polluted cities, a sky village for Los Angeles, a 3D printed tower in the desert and a vertical transportation hub among other innovative projects.