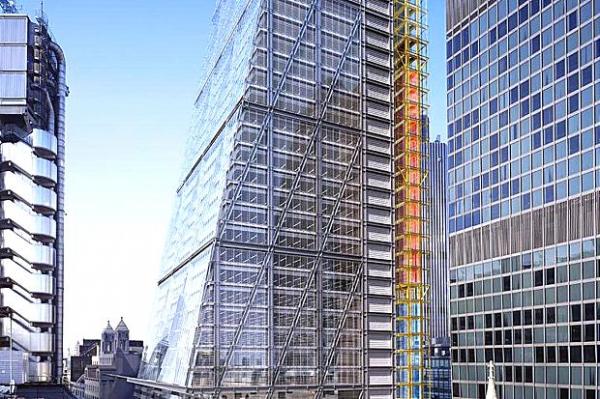 As reported in a variety of media yesterday evening and this morning, part of a bolt - 'the size of a man's arm' - has fallen from the giant Cheesegrater...or Leadenhall Building.

In fact, it was the size of a hand - the arm's-length bit stayed put. And although a big bit of steel did hit the ground at 9.80665 m/s2 (not allowing for wind resistance), it did no physical harm to anyone in the area - fortunately it fell to the side of the building and behind a hoarding which effectively restricted public access to the area. It came from the fifth floor.

Worryingly, a second bolt had also sheared but did not fall - from the 19th floor.

There are 3,000 of the same bolts used in the construction.

The London edition of The Metro said that visual inspections of all the bolts were taking place and plans to do ultra-sound inspections were well underway.

Wider press reporting would have suggested that the bolt had fallen out of the blue last evening, when it had fallen on Tuesday. The one that failed to fall off was spotted last week - hence ultra-sound already being organised.

The official media site for the Leadenhall Building makes no mention of the incident. Nor do channels into Rogers Stirk Harbour + Partners, the architects or Laing O'Rourke the construction firm.

The building is still undergoing its fit-out by Maris Interiors - who again are silent on the topic.

Whilst, contingency planning for informing the press and calming the public might seem to have been not to have been joined-up, Nigel Webb, head of development at the Cheesegrater’s joint owners, British Land and Oxford Properties, did grasp the bull by the horns on Wednesday to tell enquirers that the processes put in place would take weeks rather than months.

Statement regarding the Leadenhall Building

Meanwhile, British land also posted the following: Two steel bolts have recently broken on The Leadenhall Building, British Land and Oxford Properties’ asset at 122 Leadenhall Street in the City of London. No one was injured in either incident and there is no risk to the structural integrity of the building.

Public safety is our priority so we have taken a number of precautionary measures.

A full investigation is being conducted by contractor Laing O’Rourke and structural engineers Arup. An examination is being undertaken of the remaining bolts. An area has been cordoned off around the base of the building while this process is ongoing. The Building Control Department has been notified.

An update will be provided as soon as we are able.

Not included in the statement but made available to ThisWeekinFM is the following:

The bolts connect the nodes on the megaframe but the design of the structure allows for isolated events of this type and do not affect the structural integrity of the building.

Neither the police nor the fire brigade were called to the incident. TWinFM believes a HSE investigation will take place.

Making The Leadenhall Building from Paul Raftery and Dan Lowe on Vimeo.