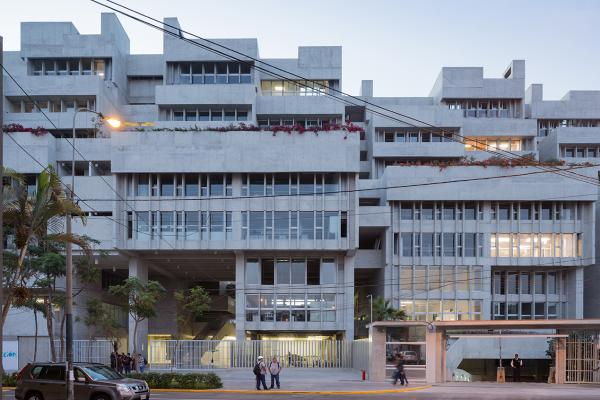 The Universidad de Ingeniería y Tecnología (UTEC) in Lima, designed by Grafton Architects, has won the first ever RIBA International Prize. Setting a new global standard for architectural achievement, the Royal Institute of British Architects’ prize has been judged by a grand jury chaired by world-renowned architect, Richard Rogers

UTEC is an inspirational new building in the Barranco district of Lima and a bold new addition to the city skyline. The Ireland-based architecture firm Grafton Architects in collaboration with local partners, Shell Arquitectos have created a new campus building for Lima’s specialist engineering university, established to give young Peruvians access to qualifications, professional opportunities and to encourage social mobility.

Speaking about the building, the RIBA jury said: "UTEC is an exceptional example of civil architecture - a building designed with people at its heart. Grafton Architects have created a new way to think about a university campus, with a distinctive ‘vertical campus’ structure responding to the temperate climatic conditions and referencing Peru’s terrain and heritage.

"Sitting on the border of two residential districts in Lima, in section UTEC perches tantalizingly on the edge of a ravine. Seen from across the ravine it is as bold and as pure a statement of the symbiosis between architecture and engineering as could be imagined; a piece of geology imposed on its pivotal site, mirroring the organic curve of the landscape and accommodating itself in the city. To its close neighbours, it is a series of landscaped terraces with clefts, overhangs and grottos, a modern day Machu Picchu.

"UTEC has been designed to encourage its students to interact in a unique way with the building. The vertical structure provides open circulation and meeting spaces in a succession of platforms that compose the ‘frame’ of the building; teaching rooms, laboratories and offices are enclosed, inserted into and suspended from the exposed concrete structure. The frame is a device providing shade, a place of rich spatial exuberance and a platform from which to view the life of the city. The entire life of this vertical campus is on full display to the people of Lima.

"UTEC is the culmination of years of experimentation by Grafton Architects. In this building they show the mastery of their craft, gifting Lima with a bold yet considerate contribution to the city and a visionary, world-class building."

RIBA President Jane Duncan said: "UTEC is an exceptional addition to the city of Lima, and a project that will inspire other architects and universities all over the world.

"Grafton Architects have created an innovative new model for a university campus that is highly responsive to its local environment and community. The concept of a ‘vertical campus’ defies convention, as does the mix of open and enclosed spaces, but both are key to the success of this building visually and spatially.

"The RIBA International Prize was created to celebrate civil architecture that empowers people and societies to innovate and progress. UTEC stood out from all other entries from around the world, clearly demonstrating its understanding, engagement with and concern for those who are lucky enough to live near, visit, teach and learn in it. The RIBA is d elighted to award Grafton Architects the 2016 RIBA International Prize."