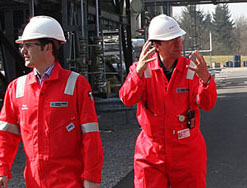 A Hampshire-based energy company has been fined for releasing natural gas and crude oil.

Humbly Grove Energy Limited is a top tier COMAH operator whose main activity is the injection of natural gas into depleted underground oil reservoir for storage.

Winchester Crown Court heard how on 26 February 2014, an incident occurred during a maintenance operation involving the release of approximately 145 kg of natural gas into the atmosphere, together with some crude oil onto the concrete lined kerbed process area; resulting in the formation of a flammable gas cloud. While the two employees directly undertaking the work were unharmed, they were exposed to a risk of fire and explosion.

An investigation by the Health and Safety Executive into the incident found that the employees involved were inadequately trained and supervised and did not follow the permit to work and isolation procedures. Humbly Grove Energy Limited, of Humbly Grove Oilfield, Alton, Hampshire, pleaded guilty to breaching Section 2(1) of the Health and Safety at Work etc. Act 1974, and was fined £80,000 and ordered to pay costs of £14,000.

A recycling company in Nantwich has been fined after a 24 year old worker was seriously injured when he was dragged into machinery.

Chester Crown Court heard how a worker for Nick Brookes Recycling Limited was dragged into the unguarded conveyor resulting in his right arm having to be amputated up to his shoulder.

An investigation by the HSE into the incident which occurred on 8 August 2013 found the conveyor belt was in extremely poor condition and access to the belt was possible as it was unguarded.

The employee was working on an ‘infeed conveyor’ which transfers waste brought by skip wagons onto a picking line.

The court heard how the conveyor was jamming frequently in the run up to the incident and there was a lack of information, instruction, training and supervision provided by the company to it employees.

Nick Brookes Recycling Limited, of Green Lane, Wardle, Nantwich, pleaded guilty to breaching Section 2(1) of the Health and Safety at Work etc Act 1974, and was fined £80,000 and ordered to pay costs of £13,000.

Speaking after the hearing, HSE Inspector Adam McMahon said: “Had the company assessed the risk, implemented the correct control measures and guarded the machine then the horrific incident could have been prevented.”

Picture: Humbly Grove Energy was frustrated at its own failings that lead to a fine