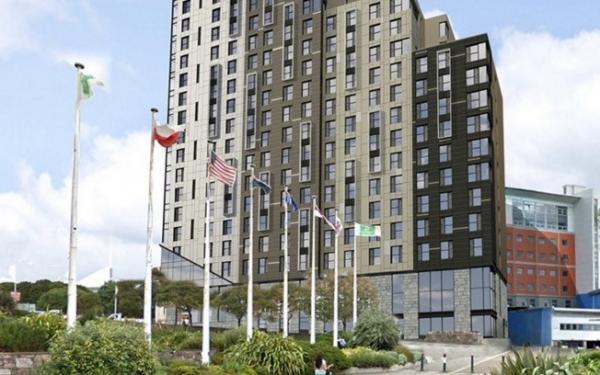 Kier has been awarded the contract to design and construct a 22-storey building that will be the tallest building in Plymouth.

Standing at 78m high the student accommodation building will provide 507 beds across 164,935 sqft in the Devonshire city.

Located at in the centre of the city, Beckley Court on Cobourg Street will comprise individual studio apartments and cluster flats and all flats will contain deluxe shower rooms and contemporary fitted kitchens.

The building will be fitted with a security system that will only allow entrance via an electronic key and be monitored by CCTV. Commercial space will be provided on the lower ground and ground floors, along with a management suite, reception area, common rooms and laundrette facilities.

Demolition work is currently taking place with Kier set to begin construction by the end of the month. The building is due to be ready for the new the intake of students in September 2016.

“The city planners were especially keen to have a building of architectural quality in that location and we worked very hard with them to design something that would be fitting,” said Bob Crompton, CEO, Threesixty Developments.

Kier reports that the project will require approximately 200 people working on site at its peak which means it will also be an important scheme for Plymouth and the city’s economy.

Picture: Kier has won a contract for student accommodation in Plymouth which when completed in 2016, will be the tallest building in the city

This has been a busy period for the Bangor based Watkin Jones Group with two major contracts and a flotation announced. The Welsh developer and builder has been...