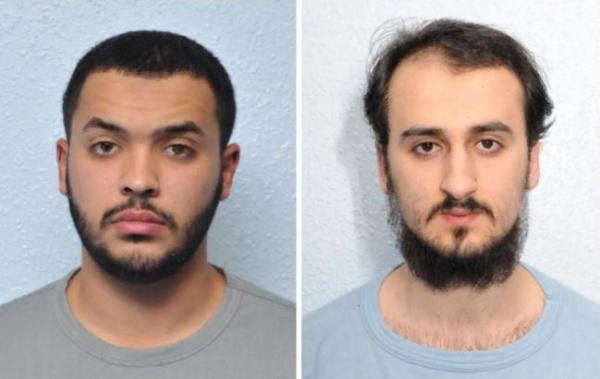 Four men were jailed on Friday April 22 for their parts in a conspiracy to commit a terrorist murder following an investigation by the Met's Counter Terrorism Command.

Tarik Hassane and Suhaib Majeed intended to target police, military or members of the public and then make their escape on a moped.

Two other men, Nyall Hamlett and Nathan Cuffy pleaded guilty to firearms offences. They were found not guilty of conspiring to commit a terrorist murder.

They received the following sentences:

Hassane was sentenced to life imprisonment and has been ordered to serve a minimum of 21 years.

Majeed also received a life sentence and was ordered to serve a minimum of 20 years in prison.

In addition, Hassane and Majeed will be subject to a terrorist notification period of 30 years under the Terrorist Act 2008 upon their release from prison.

Commander Dean Haydon, the head of the Met’s Counter Terrorism Command, said: "The lengthy sentences handed down today reflect the seriousness of this terrorist plot. In this case terrorists used local criminals to acquire firearms and ammunition to commit a terrorist attack on the streets of London targeting the police, military or members of the public by means of a drive by shooting.

"I want to pay tribute to the security and intelligence agencies, counter terrorism officers, and the Trident and Area Crime Command who worked together to intervene early to disrupt the plot and protect the public from any acts of terrorism."

Oath of allegiance to DAESH

The evidence uncovered by the Counter Terrorism Command's investigation showed that Hassane was the leader of the group, and having pledged an oath of allegiance to DAESH (IS) on 9 July 2014, was determined to carry out a terrorist attack in the UK.

Majeed and Hassane, who are close friends, were central figures in the plot, researching and planning their attack using coded communications. The court heard that Hamlett was the conduit and Cuffy the armourer who supplied the gun from a stash of firearms he had hidden in his house.

Majeed, Hamlet and Cuffy were arrested between 24 and 26 September 2014. During these arrests and searches of their home addresses, police recovered five firearms and ammunition. One of these firearms, a Baikal pistol, had both a silencer and ammunition and was intended for use in the plot.

Hassane, a medical student known to his friends as 'The Surgeon', was studying in the Sudan when his accomplices were arrested. He returned home to the UK on 30 September 2014, still intent on his attack plan. He continued to conduct online research of Shepherds Bush Police Station and the Parachute Regiment Territorial Army Centre in White City using Google Maps. He was arrested on 7 October 2014.

Following the arrests, police uncovered the full extent of the planned plot. Searches of addresses led to officers seizing hundreds of communication and storage devices. Extensive examination of these identified key devices that included two iPads, a memory card, three USB sticks, two laptops, an external hard drive and seven phones. These showed the group had been using various social media platforms across the devices with applications specifically downloaded to avoid detection.

Majeed downloaded encrypted software to talk to extremist groups overseas and whilst police have never confirmed where the person was, officers do know they were in the same time zone as Syria. Evidence downloaded from these devices graphically demonstrated the extreme mindset of Hassane and Majeed. They had shared between them a Fatwa issued by Abu Muhammad Al-Adnani, a leading member of DAESH, encouraging the murder of soldiers, police, security and intelligence agents.

There were also many graphic images of beheadings and material in support of DAESH. These all provided valuable evidence of both the planning and the motivation of the plot which was put before the court.

The men were sufficiently advanced in their plans that prior to their arrest they had acquired a handgun, a silencer and ammunition and had plans to get a moped and identify somewhere to store them before and following the attack.

Armed Officers - First of 600 Arrive in Week of Tradegy

The Metropolitan Police Commissioner, Sir Bernard Hogan-Howe and the Mayor of London, Sadiq Khan have announced the start of Operation Hercules in which 600 additional...