All in a Spin and Swiss Roll 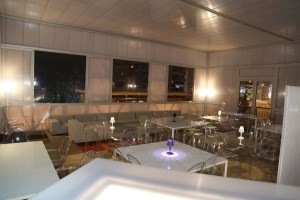 An ‘elegant structure’ featured prominently in the rarefied atmosphere of Davos during the 2016 World Economic Forum.

The display was meant to show how SABIC’s materials enable the creation of energy and material-conserving structures that are easy to assemble, disassemble and reuse.

Called ICEhouse – where ICE stands for Innovation for the Circular Economy – was built using SABIC’s LEXAN sheet and systems for the walls, ceiling, roofing and windows – all mounted to an aluminium frame. LEXAN multi-wall sheets on the walls and ceiling are filled with an insulating nanogel for energy efficiency.

“This is a structure that can be rapidly constructed, disassembled and used time after time,” explained Yousef Al-Benyan, Acting Vice-Chairman and CEO, SABIC. “The combination flexibility and energy efficiency gives architects materials to design structures that are elegant and durable, and can used in many applications that benefit society.”

ICEhouse was conceived, designed and built by William McDonough, author and sustainability pioneer and his companies, William McDonough + Partners and WonderFrame LLC. ICEhouse which was built with collaboration and support from SABIC, one of the world’s leading petrochemicals companies, will be part of the Hub Culture Pavilion, an area giving organisations and participants at Davos a space to convene and work.

The Circular Economy incorporates the Cradle to Cradle design philosophy, developed by William McDonough which incorporates the principles of material health, material reutilisation, renewable energy, clean water and social fairness. It uses this approach to product design to break the typical take-make-dispose flow of material resources, replacing it with designs that conserve materials and energy through products that are inherently recoverable, reusable and recyclable. The goal of the Circular Economy is economic growth that is not constrained by shrinking material availability and escalating cost.

Picture:    Delegates to the exclusive Davos Conference were able to view an interesting concept in sustainable products from SABIC