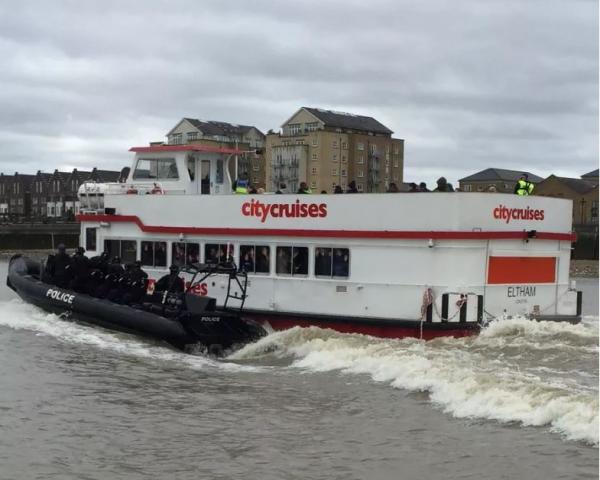 The Metropolitan Police Service, along with emergency service partners, has carried out the first joint major live-play exercise to test their response to a terrorist threat on the River Thames.

More than 200 Met Police officers and staff took part in the exercise, code named 'Exercise Anchor'. This played out between 9:00am and 1:00pm on Sunday March 19, with the majority of the activity taking place along Blackwall Reach on the Thames, near the Isle of Dogs.

The scenario involved a group of terrorists hijacking a passenger pleasure boat on the Thames and taking a number of hostages, to travel up the Thames to Central London to carry out a terrorist attack. It was designed to test the response and command and control protocols of emergency services, working with maritime partners, in dealing with this kind of situation in a marine environment.

It tested the Met’s processes right from a 999 call handler receiving the initial call through to getting victims and suspects safely off the vessel once secure. This included intelligence officers identifying and locating the threat, 'command and control' structures put in place and officers deployed to deal with and confront the threat.

It also tested how partner agencies on the river work together in this kind of scenario, with the Port of London Authority, Maritime and Coastguard Agency, RNLI, London, Fire Brigade and London Ambulance Service all involved in the exercise.

Counter Terrorism Specialist Firearms Officers were deployed during the exercise alongside the Met’s Marine Policing Unit. They intercepted the ‘suspect’ vessel, boarding and securing it. The coordination of search and rescue teams was then put to the test with a ‘dummy’ body falling into the river, challenging those responding in how to rescue the person in the midst of an ongoing terrorist incident.

Officers also used the opportunity to deploy marine-trained search dogs on board the vessel.

In his review of London's preparedness to respond to a terrorist attack, which was released in October 2016, Lord Harris recommended that security measures on the river be strengthened.

Commander BJ Harrington, from the Metropolitan Police said: "This was the first time that we've tested together the response of the various agencies that operate on the River Thames to a potential terror attack.

“I’d like to stress that this scenario wasn’t based on any specific intelligence but it’s important to remember that the threat level for international terrorism in the UK remains at Severe. This kind of exercise demonstrates that should a terrible event ever happen for real, London is ready to respond in the most efficient and effective way possible.

"With the threat level as it is, we cannot afford to be complacent and the public should always be vigilant and ready to act if the worst were to happen. Exercises such as this one show that London is prepared and should reassure anyone who lives, works or visits London that there is an amazing team of highly dedicated, professional and skilled men and women ready to keep them safe from this kind of threat.”