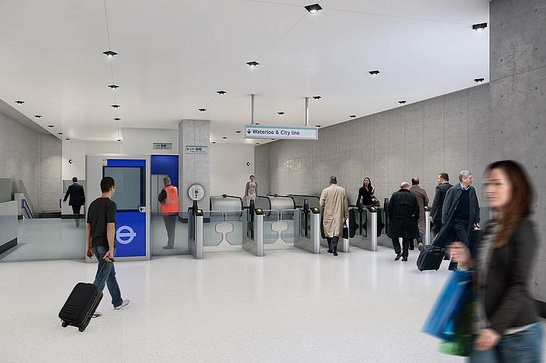 Customers can now use Android Pay on their mobile phone to travel on Transport for London (TfL) services, including the Tube, buses and trams, as well as most National Rail services in London, following its wider UK launch on May 18.

The payment app, developed by Google, supports MasterCard and Visa credit and debit cards from many of the UK's major financial institutions - including Bank of Scotland, First Direct, Halifax, HSBC, Lloyds Bank, M&S Bank, MBNA and Nationwide Building Society - with new banks being added all the time.

To use Android Pay, customers just need to download the app from the Google Play Store and set up their account with their bank card. They then simply touch in and out with the top half of their phone on the yellow card reader at a station or touch in only on a bus or at a tram stop, in the same way they use their Oyster or contactless payment card.

TfL then calculates the best fare for each day or week, depending on where and when customers have travelled. The costs of all journeys a customer makes are then added together and, if appropriate, daily and weekly (Monday to Sunday) caps are applied.

Shashi Verma, Chief Technology Officer and Director of Customer Experience at TfL said: "It's great to see another mobile ticketing option introduced into the market. Android is a popular mobile operating system and we have been working closely with Google to ensure that Android Pay is fully incorporated into the Capital's transport network.

"Contactless payments have been a huge success with more than 400 million contactless journeys made already across all TfL and most National Rail services in London, using cards from over 80 countries. As more people see the benefits of this quick and easy to use technology, we're confident the number will increase even more."

Spencer Spinnell, Director of Business Development at Google, said: "We've worked with TfL to enable Android Pay on the Tube, buses and trains across London. This adds to the list of almost 460,000 contactless payment terminals in the UK where people can seamlessly tap and pay with their Android phones".

Earlier this year, pay as you go using contactless and Oyster was extended to cover services between London and Gatwick Airport. TfL is now working to expand to all London airports as well as other key locations around the commuter belt.

Customers can also get further advice by visiting tfl.gov.uk/androidpay